Home / Time off / Take a chance on life…

Always take a chance on life has been my inner mantra since I was 17. It was advice instilled in me by my father Marius as I left England for Paris to become an au-pair, having been expelled from school. 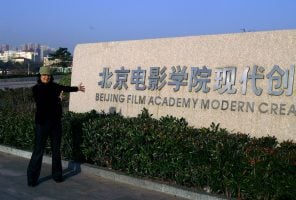 He died on Tuesday 6 January 2009. And exactly six years later, I was reminded of his words again when I got an amazing opportunity to take a chance on life… a new life.

It was the day the letter arrived from Beijing Film Academy, Qingdao campus, the coastal city, China’s Hollywood, offering me an associate professorship in film production with my partner, Wang Ying. I was 55.

It seemed that 16 years of carving a life in frozen French Canada had born fruit. It was time for a new adventure

2018: three years later, I walk to school, nestled on Jinshahtan – Golden Beach, to my documentary class of 25 third-year students. Punks, rebels, poets, lovers, and temporary misfits – art school students like anywhere in the world.  I made itThe department has me offered another three years if I want. It is an incredible privilege, life is generous after years of working so hard. A gift. I adore China, my second home, yet I almost gave up without taking that chance on life.

I prepared in Montreal before leaving, taking a TESOL course and basic Chinese lessons. However, teaching in a Chinese university is complex and demanding. I could never prepare for this. It was not due to cultural differences. I was a traveller and had lived in more isolated countries, such as Iran. It was Chinese academia, the expectations to succeed, gruelling hours and silent competition between teachers.

Being the only foreigners on campus, eyes were on us. We were told: not too many Americanisms. No YouTube, Google, Facebook or Twitter – all banned. So how to teach documentary which probes? How to find a way around conformity? It was daunting.

Language was my largest barrier. I knew little Chinese and found it hard to grasp. Everyone wants to learn English, so it is hard to learn quickly. Secondly, Chinese are immensely gracious, but tough. Teachers have to achieve for the students, accept pecking orders, and not complain. Ci Chu Wu Sheng Sheng You Sheng – Silence is better than half a sound. After three months, the Head told me: “You are no longer a guest, you’re like anyone else, no exceptions!” Which was a compliment, but added extra stress. It meant nose-to-the-grindstone.

I panicked. Spent hours researching and creating classes which I felt were failures. I could not stimulate my students, even with an assistant.

I worked so hard. People did not understand me. I was unhappy, creatively blocked, lonely and homesick for the first time. Wang Ying was drifting back to his Chinese roots with less time to help me.

I contemplated leaving. My daughter Alyosha had to remind me of our hard years in Montreal.

In North America, as an immigrant and single mother there are no hand-outs. We lived in a tiny apartment, sharing a room. I juggled work in a holistic clinic with study at film school. She juggled schooling and being a pre-teen. I was 43, the oldest student in the faculty, having been accepted as a mature age student. She was using a new language – French.

We had very little money, but were happy, encouraging each other. I was slower than other students, never having had a formal education, yet I kept focused. I had a dream. So did she, we never gave up.

I graduated from Concordia’s Film School with honours and a body of award-winning work. I went on to mentor, creating my documentaries, happily mixing therapies and film. A perfect match.

Alyosha graduated in 2015 with honours in social work the week before I left for China. She now lives in England.

So, what was wrong with me? I had taken a chance on life, waited so long to get my visa. Wanted it so much. Was trying so hard. Learning new technology, doing affirmations, meditating, laughing, crying, a drink or two, three… but it was not enough. I just could notget that inner passion to turn this journey into a Chinese love story.

I decided to give myself till the end of the semester, then would break my contract.

One cold November day I wandered along the beach with my camera. 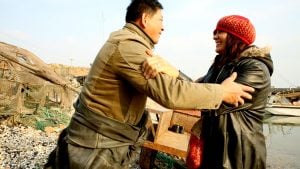 I met a fisherman and watched him fix his nets. He was handsome with an interesting face, so I asked if I could film him and enquired about his work. I basically understood his reply:

Later it came like a flash. I had been pushing in the wrong direction, against myself. Trying to be who I wasn’t, and I had not done that before. Attempting to be an academic instead of a filmmaker. I had been employed to teach documentary film, not film studies, and I was not being true to me. Another thing Dad would say: “You cannot change an orange into a lemon.”

It was the beginning of change. I reinvented my classes to be more visual, upbeat, intimate, with lots of laughter. Along with my students we created an English corner so we could get to know each other. I got braver and modern! Our office became a student hangout, more like a little cinema club and it suddenly didn’t matter how bad my Chinese was or my trouble grasping the technology.

And I met my dear friend.

Zhang Yuan is 24 years old, eclectic – bit of a Tom-Girl who organises the Qingdao indie film festival alongside working as a clerk for the Communist Party. It was an immediate connection. I had really missed the intimacy of a soul-mate. With her bit of English and my bit of Chinese we make a great team strumming along the streets on her bike.

She introduced me to Qingdao: the tiny cafes, artists, the back-street gamblers, wide-open smiles, midnight flower markets. She helped me shift my perspective. My Chinese love story had began.

I began to notice, despite long hours of working, the Chinese have time to enjoy. They’ll just switch off, sleep wherever they happen to be, then burst back into life. They laugh a lot, and are passionate about eating – their favourite pastime. Collectively they do not look back in anger, trying to dig up their difficult past; they move forwards, into that flow. They take a chance on their life.

By 2016 I was in my flow, excited with the adventure of school, and with this, the thrill of creating came back. I began my documentary The SeaHut, with my handsome fisherman as one of the subjects. I started to write my China blog From Fish to Film – to express my feelings about this amazing place.

That year Wang Ying and I were awarded the best teachers’ award.

2017: My Chinese improved, our students won prizes. Preparing a link between France-UK-China for a student festival with a friend.

I am grateful the beginning was painful, that I had to suffer, it has made it more meaningful and beautiful. And grateful to my dear father Marius… always take a chance on life.