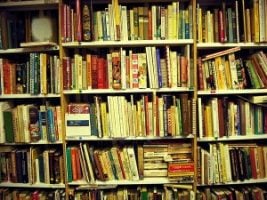 The South West London Book Club has been successfully growing for more than a year now, having been formed in December 2011. We started with just five members varying in age, gender, interests & tastes and have expanded through promoting ourselves via twitter and our website.

We are a friendly group, always keen to meet new potential members, and we offer a welcoming and unintimidating environment for anyone that may be interested in coming along.

What happens at the Book Club?

We meet every month, generally in Wimbledon at a local pub, the Hand & Racquet. We
normally catch up with one another first, order beverages, and then get into discussing the book.

Discussions are by no means limited to whichever book we’re reading and on more than one
occasion have led to lively debates! We’ve just read Siddhartha by Hermann Hesse, and it was interesting to see how divided the group was on the book. I won’t spoil it for you, if you’re planning on reading it, but needless to say, it’s a good discussion starter. Next month we’re reading The Other by David Guterson.

How do we choose what to read?

From previous book clubbing experience, we think that there is sometimes a danger that book choices will be dominated by a small proportion of members with similar interests. We wanted to have a book club in which every member gets a chance to elect a book, and one in which everybody’s exposure to new authors and genres was increased. Therefore members take it in turns to present three books to the group, with a short synopsis to give everyone an idea of the content without any spoilers! Then the rest of the group vote on which book they’d like to read.

READ  Book Club: The Beekeeper of Aleppo by Christy Lefteri

This means that at some point, every member will have a month in which their tastes are
expressed. It also gives a greater insight into each member’s interests and character, which is really interesting.

It’s exciting how far we’ve come in little over a year. Personally, I joined as a new way of
meeting people when I moved to South West London, and now I have a group of wonderful
friends that I look forward to meeting each month. If you’d like more information or are interested in coming along to our next meeting please do get in touch – southwestlondonbookclub@hotmail.co.uk