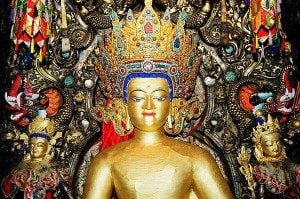 Herman Hesse’s 1922 novel follows the son of a Brahmin as he sets out on a spiritual journey in an attempt to find enlightenment. His travels lead him to a life of self-imposed poverty as a Samana, to an encounter with the Buddha, to a woman with whom he finds love before falling into a life of hollow pursuits and vice, ultimately to find fulfilment as he meets a ferryman who serves to guide him to his destiny.

Hesse’s prose is simplistic and the book itself is very short, which makes its attempt to tackle questions of existentialism all the more impressive. It proved to be a good choice for our book group because it seemed to mean something different to each of our members. While I wouldn’t go so far as to say that there was anything so profound in it that it would change any of our members’ lives, there are a lot of good discussion points focussing on points of morality, and the book provides an interesting introduction to spiritualism and Indian philosophy.

It explores a number of interesting themes, with Siddhartha meeting various people who seem to represent different aspects of his personality, ranging from his childhood friend Govinda, representing his thirst for knowledge, to the merchant with whom he goes into business and who represents his greedy and materialistic side. He also meets Kamala, who teaches him love and gives birth to his son, as well as Vasudeva, who reflects Siddhartha’s enlightenment. By mirroring the protagonist’s personality in the people that he meets, Hesse demonstrates the complexity of the individual, showing how, at different points in Siddhartha’s life, his definition of himself changes.

This sense of fluidity in his character is one of the things that, for my part, made the book uplifting, in so far as it teaches that you can always make some positive change in your life. However, one of the overriding messages in this book is that you can only acquire wisdom through your own experiences and not vicariously through the teachings of another. So perhaps, rather than attempting to pass on what I learnt from the book, it would be better if I were to suggest that you should read it for yourself and draw your own conclusions! You may find something in it that inspires you, you may not, but at the very least it is an interesting read that provides a different perspective on fulfilment.