This month we meet the Manchester Book Club 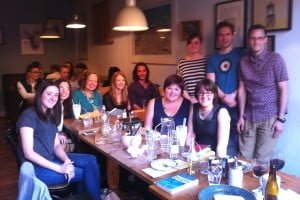 How did it all begin?

The book club came to life when two Manchester bloggers and book obsessives decided they needed yet another excuse to read compelling literature and analyse and discuss it with other book lovers in the local area, preferably over tea, cake or a pint or two. What blossomed out of a small group of six is now a friendly, chatty group of people twice the size.

With men and women ranging from their early 20s to 60s, with an understandably wide variety of tastes, our discussions are rewarding, relaxed, and often rather tipsy!

What happens at the meetings and how do we choose what to read?

Once the group have had a chance to catch up and eat their tea, the more formal part of the meeting is roughly split into two halves; the first to discuss what we’ve read that month, and the second, most excitingly, to choose next month’s book.

The concept of the group is not only to meet and make friends with like-minded people but to expand our comfort zone slightly and read things we might not ordinarily pick up. In our democratic microcosm we each take it turns to bring a selection of books to the meeting to vote for and, being such a varied bunch, this certainly makes for some interesting picks and new discoveries.

Our get-togethers also invariably descend into general bookish merriment and we have, on occasion, crept out of our little corner to go disco dancing elsewhere…

What highs and lows has the book group seen?

The only real low is if we have to say goodbye to a friendly face, which has happened once or twice as people have moved away. Happily, the highs are bountiful and even the more unpopular book choices result in lively meetings as people inevitably love to hate a book, especially when they can share their frustration with their friends.

Outside of the monthly meeting we have enjoyed days out together, one to an Aladdin’s cave – Sharston Books, in South Manchester – and another more coffee-orientated affair elsewhere. Despite our busy lives we hope to plan more ‘school trips’ later on this year.

The Manchester Book Club had its first birthday in April and to celebrate the group voted for their best and worst ‘book of the year’. Beloved by Toni Morrison deeply affected us all in some way and turned out top of the pile whilst another classic, The Drought by J G Ballard, turned out to be, well, a veritable drought really!

All are in agreement, however, that May’s read; Pigeon English by Stephen Kelman, is a clear contender for next year’s vote.

Find out more by tweeting @MCRBookClub.