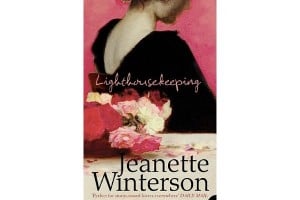 The heroine Silver, ‘part precious, part pirate’, lives with her mother and her skew-whiff ‘DogJim’ in a vertiginous house cut steep into the bank above Salts, ‘a sea-flung, rock-bitten, sand-edged shell of a town’ on Cape Wrath. Her mother, falling down the bank as they are scaling it, dies, and orphan Silver is adopted by the blind lighthouse keeper, Pew, as his assistant and heir.

There have always been Pews at the lighthouse ever since it was built in the mid 1800s. Silver’s story and that of the Reverend Babel Dark, who came to Salts as a result of the building of the lighthouse, commissioned by his father Josiah Dark, are interlaced in parallel narratives: ‘Tell me a story, Pew’ and later ‘Tell me a story, Silver’.

The heart of the story is storytelling itself. Literary references abound, including, obviously, ‘Treasure Island’ (Blind Pew, Long John Silver and Jim Hawkins) and the story of Tristan and Isolde. Robert Louis Stevenson, of the family of lighthouse builders, and Charles Darwin visit Salts. Alison recognised themes from Othello.

This brief summary neatly illustrates a story of two halves (to borrow a football cliché): dark and light (Babel Dark and his alter ego Mr. Lux); the light of the lighthouse and its dark shadowy rooms; Jekyll and Hyde; Tristan and Isolde; Darwin (‘objective, scientific, empirical, quantifiable’) and Wagner (‘subjective, poetic, intuitive, mysterious’); all metaphors of our conflicted lives.

‘I was brought up to lighthousekeeping. Turn down the daily noise and at first there is the relief of silence. And then, very quietly, as quiet as light, meaning returns. Words are part of the silence that can be spoken.’

Opposites and stories again and again!

Jeanette Winterson’s unique, breathtaking prose suffuses this short 2004 novel, imparting a lyrical and touching quality that all of us found easy and fulfilling to read. It is partly magical realism, all of it is very funny and fragmentary – Jenny, reading it on a Kindle, found the layout challenging and wondered if part had been missed out.

But this is of a piece with the overall feel of the book – once the lighthouse is mechanised and Pew disappears somewhere into the ether with DogJim, the tone changes and the grown-up Silver seems almost like a different person to the child, stealing a book and a talking bird that calls her name, visiting Capri and getting help for her conflicting emotions. But then the stories return; Babel Dark finds the resolution to his split life, Silver returns to the lighthouse many years on and the fossilised seahorse, ‘Time’s frail hero’ and a constant companion for Dark and for us, is loosed into the sea.

We all agreed it was a great read, but, strangely, ultimately somewhat of a disappointment – like a patchwork, beautifully crafted, but with some pieces that do not quite fit. We could not decide why exactly, as all the separate elements are marvellous, until Karen pointed out that she felt that the whole early story narrative is engineered by the author to enable her to tell her own story in the final and second half. After her bizarre adventures Silver meets the love of her life and reaches the resolution of all the striving for meaning in the stories: ‘I love you. The three most difficult words in the world. But what else can I say?’