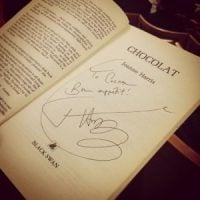 We met Joanne Harris when she was doing a talk in Sheffield about the book Peaches for Monsieur Le Cure, which is the third book in the Chocolat series following The Lollipop Shoes.

She was very friendly and kindly signed our copy of the book and let us have a picture taken with her. It was really interesting to hear how she created the characters in the book and how she had come back to the characters for the sequels. She made them sound like real people that she didn’t want to let go of.

Many customers say our shop reminds them of the book (or film) Chocolat – it is very magical and has an overwhelming smell of rich chocolate as you come in. It can make anyone feel like a kid in a sweet shop just for a moment. Like the shop in the book, we are also a small hub of the community – we listen to people’s problems and hear all the gossip in the area. My father is a vicar, so I like the idea of chocolate being so rebellious, especially at a time like lent. 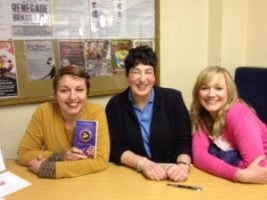 Chocolat begins with Vianne Rocher, a single mother, who arrives in the night with her daughter Anouk, to a tiny French village called Lansquenet. She controversially opens a chocolate shop and cafe opposite the local Catholic Church just as Lent begins. Father Reynaud is threatened by her brazen decision and takes an instant dislike to her.

The chocolate shop divides the community and reveals their true characters. Vianne quickly gets to know the lives of the locals as they are drawn into her delicious shop. She likes to guess which is their favourite chocolate and feels different chocolates represent different personalities.

Gypsy travellers also enter Lansquenet and we are introduced to Roux. The community again begin to take sides as the simple village life is shaken up. There are strong themes of temptation and desire, magic and sin.

It isn’t set to a particular time but the village feels old fashioned in its pace. Vianne and Roux represent a modern, open-minded view that some of the locals feel uncomfortable with. They have also travelled far and wide and so appear exotic and unknown to the locals.

The book leads up to the Easter festival, which is described beautifully as a colourful parade. Joanne Harris is a very sensual writer and this book describes chocolate so well you feel you have satisfied your taste buds by reading it.

I would recommend Chocolat to anyone; it’s lovely to escape to and a literary feast to indulge in.