Ask most people about Stratford-upon-Avon, and the name that immediately springs to mind is William Shakespeare. The well-known playwright is a source of inspiration to budding writers as well as being a tourist attraction.

But Stratford boasts another writer, and one whose name is rarely touched upon: the Victorian novelist Marie Corelli.

I must invent a name – and make it famous.

Ahead of her time

Marie Corelli wrote thirty plus works, most of them novels. She is still described as a ‘popular’ novelist and in one sense that was certainly true: her books sold thousands, sometimes hundreds of thousands.

What the critics said was partially true. She would use ten words when one might have done and her language was flowery, but the novelist was still ahead of her time. Her books were mystical, not just romantic, and tapped into trends such as astral travel, séances and mediums.

The power of electricity had just been harnessed and Corelli used this as a kind of metaphor for spiritual transport. Her books were often a call to action, to be morally stronger and to raise one’s game.

The press laughed, but her work won her fans, and many followers, and her later lectures were well attended. To friends and family, Marie was a gem, small in stature but big in heart. But she also had a difficult side.

Corelli could be fierce, ruthless almost, to those she opposed, and she didn’t mind putting her point of view across, even if it upset others. It frequently did.

In Stratford today she is barely remembered. Mason Croft, her former home, has two small plaques and there’s a board in a nearby public park, but not a lot more.
Her time in the town was rather chequered. She moved to Stratford in 1899, and her early years there were filled with promise, feted and praised, but as time went on the gloss wore off.

She exchanged words over Shakespeare’s church, Holy Trinity, and later went on to save some cottages, historically valuable, and an asset to the town (Henley Street, 1903) but she crossed swords with Stratford’s worthies, and this became a common pattern. They resented what they saw as her interference.

However, Stratford owes her a vote of thanks: she saved Harvard House (built in 1596) for those who came after. Corelli bought it and had it restored, with financial support from her US contacts. She also preserved a strip of land which is now the park mentioned above.

Even in 1920, twenty-five years after her peak, Marie Corelli was still a household name. 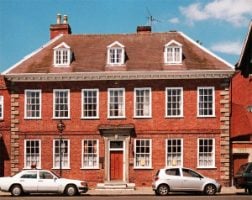 As the years went on her books still sold, but the mood was different and her novels no longer matched the times. Her later life was tinged with sorrow. The success she achieved with Harvard House wasn’t matched with her own home, Mason Croft.

She left Mason Croft to her friend Bertha, for as long as she lived, but later intending it to be a place for visitors to stay, no doubt to exchange lively ideas. The plan fell through with the Second World War and a lack of resources.

Today, Mason Croft has a different role: as the headquarters of The Shakespeare Institute, which is somewhat fitting, as Corelli was Shakespeare’s strongest advocate.

Despite her failed plans, she would, I believe, be glad to know that the ghost of the Bard, and all his students, walk through her rooms.

We are the arbiters of our own fate and that fact is the most important of our lives.