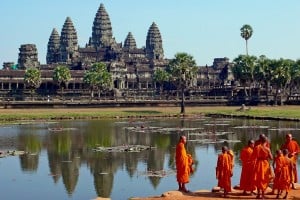 It was my husband who mooted the idea of a trip to Cambodia and Vietnam. We have travelled fairly extensively in Asia but have never been to countries so blighted by war. I have to put my hand up and admit that whilst I enjoy exploring I also like my luxury ensuite bathroom, comfort, cleanliness etc.

Cambodia and Vietnam don’t sound terribly sanitary, but we explored our options and, with the help of a good travel agent, settled on an interesting and varied itinerary which managed to encompass my desire for western standards in food and accommodation and my husband’s to explore and have new experiences.

February is always a good time to leave the UK, so we duly left late February, treating ourselves for the first time to business class seats guaranteeing a comfortable ride. Flying to Cambodia takes time: a six-hour flight to Dubai, change, another flight to Bangkok, change and then on to Siem Reap in Cambodia. We arrived tired and dishevelled, but grateful for the accoutrements business class offers and ready to experience Cambodia.

We went straight into a whirlwind tour of the Angkor Temples – astonishing edifices from the 12th Century. We were due to board our boat the next day for a river cruise down the Mekong River, cruising through Cambodia and ending up in Ho Chi Minh (Saigon) in Vietnam, so, sadly, had little to time to explore these amazing constructions.

The temple complex is remarkable – massive and consisting of several sites. As in Egypt, with the pyramids, you marvel at the technology they didn’t have and their ability to build massive structures that still stand today. Erected from the 12th Century during the Khmer Empire, they reflect two religious influences: Buddhism and Hinduism.

Our whirlwind tour wasn’t enough! To view the two other most important temples, Ta Prohm and Preah Khan, we could, the guide gravely informed us, leave the hotel at 6am the next day and beat the crowds and the heat. What the hell – we were there, why not? This proved to be an excellent decision. They were better than the main man, particularly Ta Prohm, which is famous for the massive trees that have overgrown and encroached on the temple buildings.

We boarded our river cruise that afternoon – a comfortable and pleasant way to traverse the country. The poverty there is appalling, with small children often minding smaller children, with few clothes, no shoes, but always beguiling smiles.

The number of passengers was small (twenty) and cosmopolitan – Australians, Americans, Swedes, Brits – which made for a very friendly and non-cliquey atmosphere. The poverty around is sometimes difficult to reconcile with this holiday atmosphere, but tourism is an important source of much needed income in a country with little agriculture and riddled with corruption. Poverty is endemic, with many earning $3 a day, less than we pay for a cup of coffee.

An integral part of the cruise were the excursions: Cambodia is chiefly known for its bloody history, with its dictator Pol Pot infamous for his murderous regime in the 1980s. A visit to one of the many Killing Fields with its famous memorial full of skulls and the detention centre was sobering but important. Walking round we were made aware of crunching: the small bones visible under our feet were remnants of the many bodies that were still buried deep down.

It makes one get rather philosophical as the thoughts ‘could we ever be like this?’ and ‘what makes people behave so badly?’ cross your mind constantly. The Genocide museum is also sobering, where people were detained and tortured, victims of a vicious cruel regime that saw treachery and corruption as an everyday part of life.

A week later we arrived in Ho Chi Minh, a city with traffic that makes one’s eyes boggle; ten million residents and eight million (so we were told) scooters, which all seemed to be on the road at the same time. There seems to be no conception of giving way – the drivers are adept at weaving round each other, cars, tourists, bikes.

It is a vibrant, colourful city, with its ubiquitous central market teeming with people haggling for bargains. There is a plethora of diverse restaurants and hotels catering for the all-important tourists, varying in price and quality. We had a meal at a local restaurant, full of young people keen for a bargain, and paid £20 for a meal for four with drinks. Rex’s Bar, another of our eateries and overlooking the city, was more pricey but had a distinct open-air restaurant and marvellous views.

I had decided before going to get a dress made and so made a beeline for a tailor that the guide had recommended. This was an easy process and consisted of flicking through a file of photos to select a style, choosing a fabric and being measured. I duly paid $70 and was told to come back tomorrow at 6pm. Easy – and I was delighted with the result.

An hour’s drive from Ho Chi Minh are the Cu Chi Tunnels, a vast complex used during the war to shelter from aerial attacks. These are worth a visit and again a sobering experience. The chance to go underground (“It’s not very far, only to over there,” said the guide) through a tunnel, now made larger to accommodate the Western frame, was one we took up but is not to be recommended – a tortuous, claustrophobic and prolonged experience, only taking a few minutes but seeming much longer, exacerbated by teenagers ahead who squealed and yelped their way through.

We culminated our trip with five nights in Nha Trang, a beach resort on the coast. This was heavenly, our beach villa only a short stroll along golden sands to our breakfast venue enabling us to unwind and relax after the frenetic atmosphere in Ho Chi Minh.

Shame we had to come home to snow!