Home / Time off / Nostalgia / Smoothing out the bumps 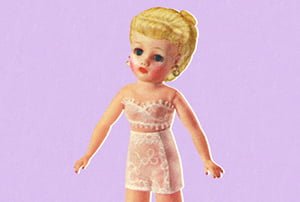 We saw them on television ads, in magazines and catalogues, shown on perfectly formed women, and we didn’t really know what they were for, just that they were for grown-ups.

My mother wore them for decades. Grandma called them corsets and talked about the mysterious “liberty bodices” she and her friends wore in the 1920s and 30s. My mother scoffed at her for being so old fashioned. Their purpose was to stop your backside wobbling about, and to squash your stomach flat by squeezing so tight that there would be a lot of leftover flesh both below and above. I don’t recall it being a particularly good look, when we found ourselves squashed into a changing room cubicle and saw my mother without a frock on.

Drying on the clothes horse, they looked quite impossibly small. My mum was measured up by a well supported lady with a tape measure in a Sunderland department store, so I guess they were the right size. But it did seem to take an extra ten minutes dressing time every morning to get one into place.

My friend’s dad actually banned her family from watching ITV because of the sinfully salacious underwear ads.

And then they were gone. They weren’t on the clothes lines, or in the knicker shops. You could probably still buy them from a catalogue, but they disappeared from our television screens and our glossy magazines.

In the 1970s fashionable women wore pantyhose and underwear that looked as if it wasn’t there; the confident ones went without. Only your gran still wore practical personal upholstery: corsets and those big white bras with cones for their bosoms and six inch wide elastic straps.

In the 80s, we got the glam stuff. Goodbye pantyhose, and panty girdles. Hello hold-ups, Wonderbras and French knickers. If you wanted to look good in fitted clothes, you didn’t buy support, you did aerobics!

And suddenly we had magic pants.

Sara Blakely invented Spanx. Their fame spread. Now you can get your unruly body shape under control with Spanx and many other brands of Lycra enforced underwear. Like Lycra –DuPont’s brand name for elastane – Spanx have become the generic word. Whether you get them from M&S or Uniqlo, that’s what we call them.

Whenever we want a smooth silhouette, we pull on the magic pants. They’re still a challenge to get on (and off), but it’s not quite the struggle it was in the last century. I defy anyone to turn up at their school reunion without at least one layer under their Sunday best.

There are stretchy pants for hips and thighs so you can wear fitted skirts. You can get stretchy middles that control your waist and flatten your front. There are top halves that smooth you from armpit downwards – no bulges escaping from above or below your bra.

It’s not just us, it’s the next generation. We no longer need a fitting from a stout lady with a tape measure. We don’t have to stand there passively as she calls out your measurements and raises her eyebrows. Wearing them won’t give you an embolism and they look like normal knickers now, just bigger. If you’ve had a bad cake day or two, pull ‘em on and get into your skinny jeans.

See also  Underwear shopping: why is it so difficult?

While they’re borrowing our mascara and best handbags, our daughters help themselves to the Spanx too! Why worry about the wobbles? Just put them in their place with a bit of secure stretchiness.

Of course I’ve got some. Don’t we all?