Since childhood, I’ve been fascinated by the different ways that people choose to live their lives, or by the lives which are inflicted on them. 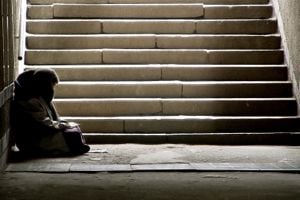 I’ve always felt comfortable with most groups of people and would be equally relaxed talking to a Duchess or a rough sleeper.

So I was happy to take the opportunity to join an (informal) group of people to take hot drinks and food to rough sleepers between November and April. I joined the Friday night team, as it was the afternoon when I finished work early.

It was off with the corporate manager’s suit and on with the tracksuit, warm coat and gloves.

We met at 10pm, having already bought our contribution of food. Being a vegetarian, I always made cheese sandwiches as the fat would provide warmth. Others gave sausage rolls and sandwiches. Between us we made several large flasks of coffee and tea, and stashed all our goodies in shopping trolleys with which we wandered around town.

Unfortunately, we couldn’t wear fluorescent jackets advertising our service, as the police might have seen us on CCTV and moved the rough sleepers on. As it was, we looked like a group of slightly batty old ladies strolling round town late at night with our shopping!

See also  World Fair Trade Day. Will you be 'an agent for change'?

There was a full moon, and at first we crossed the busy, well-lit, familiar roads of the city centre as though we were about to pop into Marks and Spencer’s.

However, the scenery soon changed.

I have lived in this city for many years, but was about to see parts of it which were previously completely unknown to me.

Trundling down an apparently empty, unlit narrow lane at midnight, I was frightened to hear a loud howling sound coming from behind a tree outside a disused building. It was a harrowing noise; something between distress, and a warning.

Yes, I was scared!

Behind me a shabbily dressed man appeared and said: ‘Can I have a cuppa love? Eight sugars please.’ As I shakily poured his tea, he noticed that I was still looking anxiously at the tree where the bellowing continued. He pressed his hand reassuringly on my arm. ‘Don’t worry about Jimmy’, he said. ‘He makes that noise when he’s scared, and he knows you’re new here.’

Feigning nonchalance I walked a little closer to the tree. My colleague told me not to go further, but to call out. So I adopted a confident voice and asked if he’d like tea. 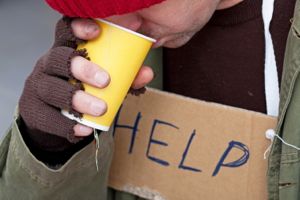 ‘Eight sugars please,’ replied a shaky voice from behind the tree.

‘Cheese sandwiches or sausage roll?’ Both, it seemed.

‘Christmas cake?’ He asked for a big slice, please.

I gathered his food and drink and moved closer, as I still couldn’t see the man behind the tree. My colleague told me not to go any closer, but to leave the things there.

I felt a bit uncomfortable leaving his food and drink on the broken pavement, but did so, and we walked away. Looking back at the end of the lane it was still there, but I was told it would be gone five minutes after we were out of sight.

See also  Charity: is it all getting too much?

Next stop was an archway under a railway, which was in total darkness. All I could hear was sobbing, and then the barking of a dog. ‘It’s OK, Tyson,’ a woman’s voice shouted. ‘It’s only the tea ladies. Come in love, you’re new aren’t you?’

Going under the archway my eyes soon got used to the light and I saw three young men and a young woman sharing a mattress with a beautiful, healthy-looking dog. ‘Hello bab,’ called the woman. ‘We all have tea with eight sugars.’

Once again we shared out food and received polite thanks. The woman was intermittently sobbing and the men kept reassuring her. She was unable to tell me the problem, but they all quickly started eating and drinking.

On reflection, I realised that I had expected that the rough sleepers would be men, and that they would be older.

Behind a disused office block we went to visit one of the regulars. All we saw when we got there was an empty mattress soaked in blood.My motherly instincts made it difficult for me to move on and leave them. Surely they were still at an age when parents would be worried about them? I learned that they had been there for almost two years now. Sometimes they vanished for a couple of weeks but always moved back. And the woman was always sobbing.

I’m not used to turning my back on people in distress, but this is what we did, and I knew that I would feel uncomfortable in my cosy bed later that night, knowing that they were still out there.

One of the problems with doing this work is not knowing what happens to people. It’s something to learn to live with, and just do the best you can.

An immaculately clean sleeping bag in the corner of an underground car park revealed a man of Eastern European origin. He had come here to work, and was sleeping rough until he found a job.

Further along we saw what looked like a small castle made of wooden crates. We circled widely around it, so as not to surprise the inhabitants, but when they saw us they called us over.

Both men immediately extinguished their cigarettes, explaining that they didn’t smoke in front of women. Christmas cake and tea with eight sugars, please, was the order.

Along the way, I’ve met so many interesting and varied groups of people… but I’ve never solved the mystery of why they all took eight sugars in their tea!

Want to do something to help?

Jane told us about Crisis. A national charity for homeless people, dedicated to ending homelessness by delivering life-changing services and campaigning for change.