I have a confession to make. I am a workaholic, overachieving perfectionist. 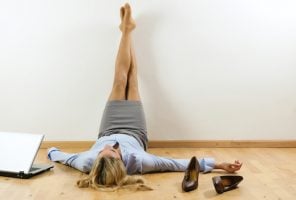 I used to take pride in this fact, considering myself invincible, ahead of the pack, productive and valuable. However, my inability to say “no” even when it meant overloading myself got me in very hot water.

In fact, I burned out rather spectacularly. I became very ill, and had to return to the UK from the US, where I had been working for nine years.

In the years since, as I have slowly recovered, I have reflected on what happened and reached some conclusions that have radically altered the way I see life and how I live it.

Here are my six tips for a less hurried, more enjoyable life:

It feels to me that life has got a little bit too fast and out of control.  Why are we always in such a hurry to be somewhere, or to get things done?  What is driving us, and what is the point of it all?

I started to wonder what life would be like in the slow lane and discovered that I quite enjoyed smelling the roses, listening to the birds sing and simply just being.  I still get a lot done, but have found that it is okay to wait until tomorrow to do it.

2 A true definition of success isn’t running yourself ragged

Where on earth did we get such a crazy idea?  I hear so many other women talk to me about their lives and they feel that they aren’t being successful if they haven’t crammed full every minute of every day in their diaries.

See also  Learn to love your body... my tips and tricks

I learned the hard way that this doesn’t define success and is a very slippery slope to failure. Success to me is living a fulfilled life and not just a full one.

3 You are valuable, even when not being productive

Again, like the skewed concept of success that many of us have, I know I really struggled to feel of value to society unless I was being productive, churning out something that was tangible for the entire world to see. But now I realise that what we produce is quickly consumed by society and forgotten. It has no lasting effect.

4 You can only live one life well

I suspect that one of the biggest epidemics facing the world today is co-dependency, and I am no stranger to it. Before my burnout, I would spend an inordinate amount of time, energy, and occasionally even money, worrying about everyone else’s life but my own.

Yet spreading myself so thinly like this had two effects that I now try to avoid. The first was that I often disempowered the people around me by trying to do things for them that they were perfectly capable of doing for themselves. The second was that I neglected my own life, and it suffered as a result.

You really can only live one life well, so make it your own.

And it can feel like that sometimes, too. People pleasing is yet another virus that can seep into our lives, and pervade our thoughts, actions and sense of wellbeing.

For me, overcoming this is not so much a question of being hard-hearted or selfish, as simply being practical. I need to please the voice inside of me that some would call intuition, and quieten the voices that compete for my attention elsewhere. That is the voice that knows what is best for us, if only we will give it a look-in.

If we slow down a bit, we can learn the true meaning of a fulfilled life, feel valued, concentrate on living our life well, and stop trying to please others. And it becomes easier to hear our inner voice of intuition.

That voice can help us discern when to say “no” and subsequently when to say “yes”. For example, in terms of my own career, I have stopped trying to live up to other people’s expectations of what I should do with my life, and have instead embraced my love of writing. I have cleared my plate of the clutter of unwanted junk, and placed on it instead things that inspire, invigorate, and rejuvenate me.

In short, I feel more alive than I ever did before.