Let’s not kid ourselves. Just because it’s January and the start of a new year, it doesn’t mean we’re all going to magically become better people. It’s raining, it’s windy and it’s dark by 3pm – if we don’t indulge ourselves a little, we’ll have nothing to do but cry until the Spring. 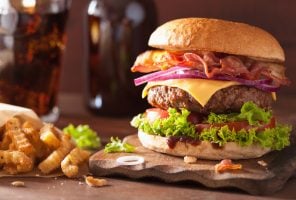 Don’t get me wrong, I am all for self-improvement but I just think we should be realistic; let’s not make promises we can’t keep. Let’s resolve to do things we actually want to do, not just the things we think we should.

So with this in mind, here’s the six resolutions I’m not even going to bother making this year. I’d only fail anyway, I’m just cutting out the middle man.

Really? When there’s still so much in the cupboard left over from Christmas? You do know it’s wrong to waste food, right? I’ll have a satsuma if I want to feel healthy, and maybe a carrot or two with my tea, but if I take the chocolate out of my life I really don’t know if I’ll make it through January.

It seems to me that nobody is more likely to drink alcohol during January than those people who say that they are going to give it up. I’ve never known anybody actually manage it. All I’ve ever seen is people talk endlessly about how they’re giving up booze in January, whilst explaining that the glass of wine they’re currently drinking doesn’t count.

And it doesn’t make any difference to me – crikey, if ever there was a month when you deserved a stiff drink it was this one. So let’s sup away, for goodness sake (though always drink responsibly, of course).

READ  Telling the truth: is honesty really the best policy?

I should do this, I need to do this, but I can’t do this. And you know why? Because – just like everybody else – I only get about four hours to myself a day as it is and if I go to bed earlier, that takes it down to three hours which is barely enough time to cook, eat, fill the dishwasher, watch an episode of Coronation Street, and perhaps even have a conversation with another human being.

Yes, sleep makes me feel a million times more human than a lack of it but being awake enables me to actually live a bit of life that isn’t otherwise spent at work, on a train or asleep. I shall instead resolve to invest in a higher quality concealer to hide the resulting bags under my eyes.

Woah woah woah, easy there partner, let’s slow down a second. Exercise is one thing – we all have to step out the door every once in a while – but before work? Like, pre-8am? Please – be reasonable. You know the sun doesn’t come up ’til at least 10, right? No no, there shall be no exercising until at least lunchtime, unless chatting counts as exercise. (And it definitely does.)

Now, I realise this sounds like just the kind of resolution I should make, but I actually resolve to watch more television this year, not less. And here’s why: I spend so much time on the internet, darting about from one thing to the other, that I can’t relax; I’m constantly moving from page to page, story to story, tweet to tweet, and never allowing my mind to just rest and concentrate on one piece of subject matter. Television, on the other hand, allows me to do just that – it tells me stories, it gives me an escape, and it involves a screen that is further than 30 cm from my face which, in this day and age, is miles away.

6. Stop commenting on the weather

Well, I’ve already done this at least once in this post so I’m clearly incapable of quitting. It’s just a fact of life for those of us living in the UK that the weather is our first port of call for something to talk about and if we take it away then what are we left with? Train delays? House prices? The cost of cheese?

And as I get older, the weather dominates my thoughts more and more – Will I be cold? Will I be hot? Will my hair get blown into my face and stick to the Vaseline I’ve just smeared on my lips? – so removing it from conversation would be like taking away a part of my personality – granted, an extraordinarily dull part – but still, there’s no point pretending to be something we’re not (i.e. interesting) now is there?

So what are you resolving not to give up this year?