I don’t know what age I was when I realised certain people in my life were controlling me – 45 perhaps? Much too old at any rate, and I wish, how I wish, I had come to that realisation years before. Because if I had I may have spared myself a lot of grief, energy and wasted effort. 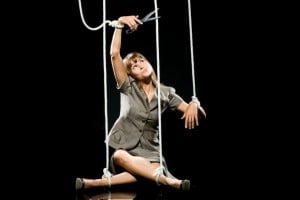 Here’s the thing. We know about control when it comes to those in positions of authority over us. We know that bosses and policemen and politicians exert control and, although we may not always like it or agree with how it is done, for the large part we accept it. What is less obvious, and more insidious, is the control that those we are close to, those we love, even, have over us.

The degree to which we collude in this control is frightening, even when we are unhappy with it, even when it is doing us no good at all. I am not talking about the full-on abusive control of the battering husband or such like, where the damage is obvious – I am talking about the everyday, humdrum, mundane control that goes on in many families, in many relationships, and which can be every bit as damaging.

Control and its effect on the family

Let me give you an example. I have a daughter. She is beautiful, bright, strong-willed and ‘feisty’. She always has been. When she was a toddler her nanny used to ask her to take off the bossy boots and lend them to someone else, and she has not changed very much over the years. She still has a tendency to be, what shall we say, rather assertive? In some situations, such as in business or when you receive shoddy service and want to complain, being assertive is a definite asset, but it can be a problem in relationships – particularly family ones, where the parents (surely) are meant to be doing the asserting for the large part, and the children the assenting. It wasn’t working out like that for us.

See also  Look at me while we're talking

As she grew into a teenager our daughter became more and more assertive determined that the rest of us should do things her way. Or at least that is how it felt from where her father and I were sitting. It was very difficult.

In particular it was difficult to try and shield our two other, more easy-going, daughters from this strong will, and to carve out a space for them where they had a voice and a say in what happened in our family. But as the teenage years rolled on, concepts like ‘anything for a quiet life’ and ‘conflict avoidance’ became realities in our lives, as, quite honestly, I didn’t have the strength for full on war over everything from where she put her shoes to smoking. I decided to choose my battles; after all, we only have so much energy to go around, right?

Wrong. Very, very wrong. Only I didn’t know it at the time, or if I did, I was too tired and worn down to acknowledge and do something about it. So on we soldiered, the rest of us, accommodating and avoiding and side-stepping where we could, with occasional explosions when we really were at the end of our tether and determined to lay down the law. After all, her father and I reasoned, we were not ducking out where really important things were concerned, it was just the everyday stuff we didn’t want to argue about, so we let it go…

A turn for the worse

Until things got really bad, hit rock bottom in fact: the college years. Two years straight from the pit of hell, or that is how it seemed at the time. Years when her social life took off to stratospheric heights with new friends and social settings to be explored, clubs to visit, potential boyfriends to become acquainted with, daring fashions to be experimented with. All of which took its toll, when run alongside AS and A Level studies. And guess who copped the fall-out?

By the time I stumbled upon the truth I was, to be honest, a bit of a wreck. Exhausted trying to keep a house, look after three children and do a demanding job on top. Particularly exhausted from walking on eggshells when she was around – and worn out worrying. Oh the worry. Where was she, who was she with, would she be ok, would she turn up at college today, would she get any of those exams?

The first step on the road back was something a dear friend of ours said when I was wailing about how she had gone off for three days to stay with friends as she couldn’t stand living with us any more.

“What a blessed relief that must be,” he said. “Now you can have a few days’ peace. Let the Lord look after her.”

At first I was shocked, but Tom is a good man, a godly man, and very wise. And as his words sank in I found myself smiling, then chuckling. And it was the start of the penny dropping. I was being controlled. Worst of all, I was enabling it, and in doing so I had made it worse. I had given the monster oxygen and allowed it to grow. I had actually been party to the mayhem that had touched our home and our lives and had abetted it through my passivity. And it had to stop.

At the same time I realised something equally important: that I could trust the God I believed in to take care of the fall-out. To take care of us all actually. If I believed what He said in the Bible about taking our burdens and cares and giving us a light yoke, wasn’t it time I started living like it? Rolling the boulders of worry off my shoulders and on to His? After all, that was part of the deal, the package of Christianity.

See also  What is true love?

The road to recovery

And so began the long, but sure, road home. We are not there yet, not entirely, but we are miles from where we started. Our lives are much, much better than they were. We still have explosions from time to time, when we say a lot and often more than is right, but for the large part we have a more balanced relationship with our daughter, because we stand up to the control as and when it rears its ugly head. And I like to think that, partly as a result of this, she has grown into a delightful young woman.

Yes, there have been times, lots of them, when standing up has made things seem worse – a lot worse. Where it has resulted in doors slamming and voices being raised to shouts. But the wonderful thing is I am quietly sure of my ground and I am advancing. And I will not be retreating, because there lies madness and chaos and stress and misery.

The truth is, we were not made to be controlled by others. We were made for freedom. Not in a hippy-dippy sense of the word, but in the true sense. We were meant to be the people God made us to be – and no-one, not even the most treasured partner or child, can be allowed to restrict, hamper, or impinge upon that. Because if we let them we will never be at peace, with them or ourselves. It is all part of the good news. As it says in the Bible, ‘You shall know the truth, and the truth will set you free.’

Three cheers to that!