The start of every new year is a time for reflection. It often means looking back over the past 12 months at your achievements, experiences you’ve enjoyed and new inspiring people you’ve (hopefully) met. You might think that you’re one step closer to fulfilling a personal dream. 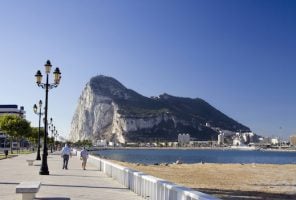 I had a dream once. And four years ago I was one small step away from fulfilling it after thinking about it for over 30 years.

I was staying with my son and his partner in Manchester, working in a temporary job knowing that when I left it I would be going to go and live in Gibraltar – where I had lived for a year back in the early eighties.

I absolutely loved it and always said that eventually I would go back there to live and it looked like I was finally going to make it after all this time.

I’d visited a couple of times to set the wheels in motion, so that when the time came I had a job to go to and, hopefully, accommodation.

The job was easy enough to come by as I would be working in a restaurant on the marina but the accommodation was a bit more tricky to find. Being over 50 in this instance was actually in my favour. A place was available to rent that would be quite close to the beach in a development for the over 50s.

Everything was falling into place but I did feel a bit bad as I’d been offered a permanent position at work which I’d accepted just in case things didn’t work out.

The end of the dream…

After giving my notice in mid February I was getting excited when I received a Facebook message out of the blue from a woman at the restaurant I would be working at. She informed me that the manager had no idea that I was going to be there and the woman that I’d been dealing with had not told anyone about me and would I phone the restaurant?

So I did and had a very painful, awkward conversation with the manager who told me that actually, there was no job and he was very sorry etc.

Undeterred I decided I would still go. But just as I was about to send my deposit for the accommodation, I explained to the letting agent that I didn’t have a job but was pretty sure I’d get one once I got there.

His reply was swift. “On no account will any landlord rent out any accommodation to anyone without a job.”

So that was that. In one fell swoop everything had fallen down like a house of cards. Not only had I sold my home, I had given my notice in so would have no job either. What to do?

Luckily for me once I’d told my boss my situation he said I could revoke my resignation, which I did, but then I had to find somewhere to live.

Fast forward four years and even though I’m in a job that should have been temporary, I live with a gorgeous gay guy in his apartment, in a city that I never thought I’d be staying in.

I hardly ever think about Gibraltar now. I truly think that in the end I wasn’t supposed to go and even though I was devastated at the time it has turned out to be the best thing.

A lot of great things have happened in the last four years and I’ve never looked back.