History of a same-sex marriage in three acts. 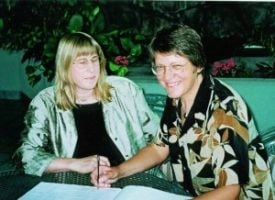 On 26 August, 2003, while Sue was living and working in Canada, we were legally married, as a same-sex couple, in Vancouver, British Columbia. In a flower-decked conservatory, we made our vows to take each other “to be my lawful wedded wife, to have and to hold, from this day forward, through all our life together”. The marriage commissioner then pronounced: “upon the authority vested in me by the Province of British Columbia, I now declare you wife and wife”.

Canada was the first place in the world where, as a British lesbian couple, we could have married – and late August 2003 was only 6 weeks after Canadian laws, introduced province by province, had begun to permit it. Although two European countries – The Netherlands and Belgium – had earlier enacted marriage equality, there it was restricted to nationals and permanent residents – Canada, by contrast, offered it to everyone.

The atmosphere in Vancouver at the time was celebratory: smiles and rainbow banners in the streets and huge plaster wedding cakes with two-bride and two-groom toppers in department store windows. We relished being a part of this history, and taking advantage of the new rights now afforded to same-sex couples.

Back in England, it was very different. On our return, no-one rejoiced at our new status. Families and friends were baffled; and the government informed us that our marriage had no legal recognition. “It doesn’t really matter”, they said, assuring us that a new Civil Partnership Act would be introduced within a couple of years, and that our marriage would then be “deemed” a civil partnership. We pointed out that any heterosexual couple married overseas would automatically have that marriage recognised as a marriage: we were simply asking to be treated the same way.

READ  Men and menopause: what do they really think?

In pursuit of equality, in June 2006 we brought a case to the High Court – supported by the national human rights organisation, Liberty, and the grassroots LGBT campaigning organisation, OutRage! We sought a declaration of our (legal, Canadian) marriage as a marriage in England and Wales. During the course of a three-day hearing, our lawyers argued that, under the Human Rights Act, we had a right to respect for our private and family life, a right to marry, and a right to freedom from discrimination. The government intervened in the case to oppose our petition. 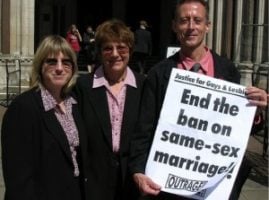 We lost our case.

The judge – Sir Mark Potter, then President of the Family Division of the High Court – accepted that we were subject to discrimination (by comparison with a heterosexual couple married abroad). However, he ruled that discrimination justified – in order, he said, to protect the “traditional” view of marriage and the heterosexual nuclear family as a context for “the procreation of children and their development and nurture”. It was a bitter blow – and, with the government’s costs of £25,000 awarded against us – the case cost us our life savings (and more). Nonetheless, we were heartened by all the support we received, sometimes from unexpected quarters: such as the students who held bake sales to fundraise for us, and the tabloid press who railed against injustice.

Trying to be positive in front of the media gathered outside the court for the judgment, we read out a statement including the following words: “This judgment will not stand the test of time.  We look forward to the day when there is full equality in marriage – not just for us, but for all same-sex couples”.

Well, the High Court judgment has not stood the test of time. It is less than eight years since we lost our case, and this week – on Thursday 13th March 2014 – our Canadian marriage will be legally recognised as a marriage in England and Wales.  The British government has implemented a new law – the Marriage (Same Sex Couples) Act 2013 – making England and Wales the 15th jurisdiction in the world with full marriage equality. 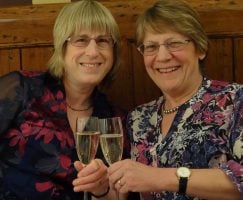 This week we are back in full celebratory mode – with plenty of champagne to mark the moment – and the party will likely continue until the end of the month (and beyond), as previously-unmarried same-sex couples will be able to marry in England and Wales from 29th March onwards.  The Marriage (Same Sex Couples) Act 2013 is also significant in ushering in – for the very first time – full legislative equality for lesbians and gay men in England and Wales.

It has been a personal and political roller-coaster of a ride, from marriage equality, through inequality, and back again. We have learned a lot, and we feel pleased and proud that the history of our marriage has become a small piece of the history of the wider LGBT community.