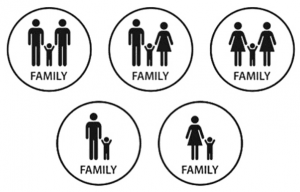 What would your answer to that question be? A married couple with two children? A single mum or dad and their child? A father, step-mum and his children from a previous marriage? Two lesbians with their donor-conceived child? Two gay dads and their surrogate child?

One thing is for certain, there is no short answer!

When legislation to allow same sex couples to enter into civil partnerships was debated, the government expected very few to actually exercise this right.

However, the uptake has far exceeded expectations, and the latest data published by the Office for National Statistics shows that the number of couples entering into civil partnerships in Britain rose by 6% in 2011, to 6,795. This may not seem like a huge number, but whilst marriage rates have been decreasing since 1972 (save for a small increase last year), civil partnerships are bucking the trend and are certainly not uncommon.

Despite more than 100,000 people entering into a civil partnership since they first became legal in December 2005, Stonewall (a charity who work for justice and equality for lesbian, gay and bisexual people) states that there is still a “limited acknowledgment that same-sex couples are capable of constituting a family, and that same-sex couples (and gay people who are not in a relationship) have children”. More worryingly, when lesbian and gay families are acknowledged it is often in a negative way with society not viewing their family as a ‘real’ family.

Same-sex families in the eyes of the law

Legally, a gay or lesbian family is no more or less ‘real’ than a heterosexual family. The law does not draw any distinction between a lesbian couple undergoing fertility treatment and a married couple, and if a clinic did draw a distinction they could find themselves in trouble for discrimination.
Of course, a lesbian or gay couple could not biologically conceive a child through traditional means, but with fertility treatment and surrogacy arrangements being increasingly used by heterosexual couples and single people, the methods employed by same-sex couples to create their family cannot be considered unique.

See also  The best board games for Christmas

Furthermore, same-sex families are not new. In January 1972 Janis Hetherington became the first lesbian in Britain to give birth to a child conceived by artificial insemination, with her lesbian partner by her side. In 1999 Barrie and Tony Drewitt-Barlow became Britain’s first gay dads when they had twins with the assistance of a surrogate in California. Any child conceived after 6 April 2009 to a lesbian couple can automatically have both mothers registered on their birth certificate as the child’s legal parents.

Same-sex families are not a new phenomenon and they are certainly not any more or less ‘real’ than heterosexual families. Please visit our website for more information or check out our Fast Facts: Same-Sex Families.

If you would like to discuss any aspect of divorce, separation, arrangements for your children or wish to protect your assets prior to getting married, contact the family team on 01202 786161 or email jane.porter@la-law.com