Home / Work and money / Business / Running your own business: a creative solution to the work-life balance

Here is a big admission – growing Snapdragon from a one-person, kitchen-table kind of business to a limited company with a studio workshop and a team of five has not been a walk in the park. Despite the sunny rural photographs of us in various glossy magazines over the years, there was no magic wand. There were a lot of false starts, mistakes and misadventures with just enough good decisions and hard work to pull us through. However, though it may have been a stressful and bumpy ride, it has been one where I have enjoyed (almost) every minute. 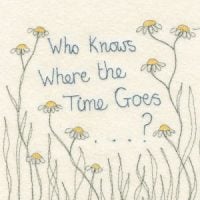 Snapdragon started as an idea back in 2000. I was working as a gallery curator, my office was in a basement and I was fed up with never seeing daylight. I had a two-year-old daughter and a baby on the way; working for someone else began to seem really restrictive. I decided to start my own business: I reasoned that if it all fell flat, I could claim it was an extended maternity leave and return to academic life.

I retrained in horticulture, spotted a gap in the market, and began a small-scale cut-flower farm, selling from my garden gate and at farmers’ markets. The flower business turned out not to be a great call: there was a reason for that gap in the market – it was terribly seasonal, customers tended to be on holiday when we had the most flowers; the spoilage rate was high; deer broke through the fences and ate 4,000 tulips in a single night.
It was clear that I needed a back-up business.
That was when I started sewing; working from my kitchen table, then from an Airstream caravan which I bought for a song on eBay, and finally from a wooden workshop/studio in the field behind my house.

Sewing wasn’t an obvious fit. I have no art training; I was so bad at sewing at school that I was not allowed to use the sewing machines. I was not allowed to take GCSE art as I cannot draw. Yet an artistic, encouraging mother meant that I have always made things and when I started experimenting with freehand machine embroidery I discovered that while I cannot draw with a pencil, I can do it easily with a machine needle. I added my wares to my flower stand and they sold; in 2005 we were invited to exhibit for free at the Country Living Fair and won the award for Best Stand.

By 2008 the embroidered gifts had taken over from the flowers, I sold through my website and wholesale to shops and demand was high enough for me to take on more staff, and then build a workshop. Snapdragon had become a ‘proper business’ … and yet … I was working all the time, and Christmas 2012 was, quite frankly, hell. For six weeks I worked 16 to 18-hour days, the work that I loved became an unremitting slog, I didn’t see my family, I didn’t go to any parties, I was knackered on Christmas Day. This was not the life I wanted and, even worse, when I added up the actual profit from all that work – well, it was certainly not worth it!

So, at the beginning of last year, Valerie, my right-hand woman, and I sat down and took a long, cold look at the figures. We stopped wholesaling as the margins had become too low, we went through everything item by item, discontinued a load of products, came up with new, targeted ones, renegotiated deals and set ambitious targets for the year.

See also  Freelancing after 50: 10 tips to get started

I do not have a business background; I had worked completely on gut instinct, making decisions according to whether things were fun or not – then I had been shocked when (surprise, surprise!) work made little money and stopped being fun. It was only when I was forced to be much harder and more realistic that things have properly taken off; through 2013 we grew at 150% and, more importantly, coped with the Christmas rush (three times the sales on 2012) while still getting in some sleep and socialising.

Then on 1 April this year Snapdragon became a limited company and was reborn as Snapdragon Online Ltd: on that day I woke up completely relaxed. It was amazing! The only way I can explain it is that as a sole trader Snapdragon was me: any problems were mine, any criticism was of me, and when things went wrong it was me personally failing, but as a separate company – well, Snapdragon is simply a business I own. Suddenly, all my attempts to delegate began to work; I went on holiday with my family for a week and didn’t check emails: everything went like clockwork in my absence.

So now I have time to look at the bigger picture, to make plans, to take on interesting projects. I have time to write more, to design more, to create free products for our newsletter subscribers and to take on projects outside the workshop, like working with local schools, mentoring, and creating a brand new garden. And my team is probably relieved that I have stopped trying to micro-manage everything!