I got into running in my late 30s. As a single mum, I found it gave me a bit of time for myself in between work and childcare. 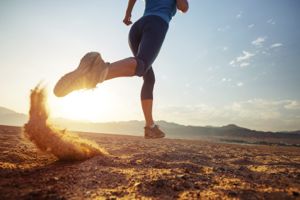 To begin with it was an occasional two-mile loop in my lunch hour. This small amount of snatched time made me feel much better about everything.

Then in 2011 my brother decided he was going to run a marathon and cajoled me into doing a half marathon with him.

Training consisted of about three runs, the longest being about eight miles. When race day came around the prospect of running 13 miles was utterly terrifying.

Everyone else around me looked so fit and relaxed. Would I come last? I was foolishly wearing cross trainers not running trainers – it was a hilly trail race through muddy fields –  and in the absence of owning a sports bra, an underwired bra.

Clearly, I had no clue.

The first nine miles were a mix of fretting, sliding around in muddy puddles and traversing stiles.

Somewhere around six miles my legs started to hurt.

Then something happened at mile 11. It dawned on me that I could actually finish… a half marathon!

The pain disappeared in the realisation that it was possible…

Crossing the finish line was a wonderful feeling. Once I had the medal around my neck I felt invincible! Sure, it was excruciating to even get out of the car, but this one race had set me on a new path in life.

Things escalated quite quickly after that. I joined a local running club which led me out onto beautiful trails near my home I didn’t even know existed.

See also  Too busy to exercise? 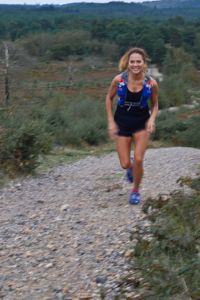 They were such a welcoming supportive group of people running as a serious hobby seemed much less daunting.

A marathon seemed the next progressive step. More and more races filled my diary. My daughter stood at finishing lines with my running club cheering me on.

I read about the Marathon de Sable in a magazine, and it seemed like the most exotic, mad, wonderful race ever. The MdS, as it’s known, is a six-day race across the Sahara desert, and it is about 156 miles.

For this race you have to carry everything you need to survive on your back – sleeping gear, food and basic safety kit for the whole six days.

So the next step was running an ultra marathon – races with a distance beyond a marathon – to see if I was cut out for running long distance.

Once this was ticked off I became fascinated with how much the body can adapt to take in events like these.

Many more races followed, from one mile sprints around London to non-stop 100 miles running. On the road, in the mud, in cities, in the countryside, running became a huge part of my life. 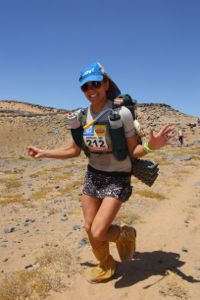 Fast forward to 2015 and I have just completed my second attempt at the Marathon des Sables.

Conditions are tough. Water is rationed and only rudimentary shelter is provided. It incorporates an ultra marathon on the 4th day (this year it was 93 kilometres long) and of course the heat is relentless.

The temperature rises to over 50 degrees on some days and sand dunes are cruel to run up.

Despite these challenges, it is one of my favourite races.

Other things have changed a lot too. My lifestyle, for one.

A generally unhealthy lifestyle of drinking too much and restricting what I ate was replaced with food being a joy, to fuel my runs. I stopped smoking after 18 years.

My daughter has grown up with her mum running. As a teenager now she is much less interested in my running. Sometimes I feel bad about the time I spend training. The way I deal with it is to try to squeeze it in around my work, in my lunch, getting up early and when she is at her father’s or friends.

Hopefully one day she can look at the medals and trophies accumulated and be a tiny bit proud.

I’ve made lots of new friends via my run club, on Twitter and in the ultra running community. These are my sort of people, friends for life.

I have never regretted going out for a run, even on the ones where I fall over, the ones that hurt as I try to get faster, the ones in the pouring rain, the ones where it is so cold and dark outside running is not really an enticing prospect.

My partner who I met through running has completed the story for me and my daughter. He runs with me, we share the same passion for it and fits perfectly well in our little family.

Every year I go back to and run the race that started it all, and am so grateful for what running has brought to my life.