Home / Work and money / Careers / Returnships: helping women back into the workplace?

Taking a career break can sometimes make it tough to get back into the jobs market. But the advent of ‘returnships’ could see things finally start to turn around for women. 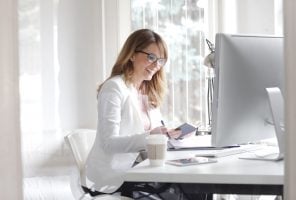 About 500,000 women are currently on a career break in the UK, of which over 90% (450,000) are planning on returning to work at some point in the future, according to PWC.  And many of these women find it an uphill struggle to get back into the workplace – particularly after a longer career break.

There are many well-documented reasons for this that vary depending on the individual concerned: tough jobs market, lack of confidence coming back into the workplace after time out (usually perceived but sometimes actual loss of required skills), a sense of guilt around redirecting their time and energy away from their family and into their own career aspirations, lack of shared parenting, few flexible roles advertised… and so the list goes on.

Most common of these, though, is the lack of flexible working arrangements at mid-senior levels within organisations, which results in three out of every five women who return to work taking jobs that are well below their actual abilities, just to secure the flexibility they need.

These are highly qualified women with plenty of business and life experience and maturity, yet their talents are being wasted due to a lack of creative thinking on the part of many employers and arguably many recruiters – the latter of whom often treat anyone who doesn’t fit into a nice easy box as a ‘problem child’ to be avoided at all costs.

Luckily though, enlightened employers such as Goldman Sachs, who pioneered ‘returnships’ – and actually trademarked the term in 2008 – are starting to wake up to this incredible misjudgement and waste of talent and do something about it.

See also  Term-time holidays… the old chestnut is back

So what is a returnship?

A returnship is a paid job, generally at mid-senior levels, for a fixed term of up to 12 months, but often as little as two to 12 weeks, that aims to provide a bridge back to mid-senior roles for experienced professionals who have taken an extended career break.

Returnships allow employers to recruit women – or men – who have a level of maturity and life experience not found in university-aged interns. They are often at a stage in their life where maternity and parental leave are behind them and they are now in a position to invest time and commitment back into their careers. A returnship programme allows employers to screen applicants from this relatively untapped pool of talent and make recruitment decisions based on meaningful workplace evaluation.

Although they started in the US, returnships are now increasing in popularity in the UK. But there are still currently only around 25 employers in the UK, including PWC, Bank of America Merrill Lynch, Worldpay, J.P. Morgan, Deloitte and Macquarrie, offering between 10-20 returnships per year.

It’s a good start though and signs are positive, with the majority of individuals offered a permanent role at the end of their returnship. Caroline Dinenage, Minister for Women, Equalities and Early Years, is calling for every workplace with more than 250 employees to have a carers’ policy and consider introducing returnships.

Is there a catch?

Returnships offer women and employers an opportunity to explore whether there’s a good match for the longer term, and give women the chance to receive support during their transition back to work. While this is all very important, a key factor in the success of returnships over the longer term will be how supportive the culture of the hiring organisation is of flexible working practices. This will be essential for not only retaining career returners but also to enabling them to fully re-engage with their careers.

Many who return on flexible working terms – days, hours or working location – are perceived as being less committed than their non-flexible colleagues and often find themselves sidelined over promotion, training and development opportunities. Many also feel pushed to choose between career or family, instead of being enabled to achieve the right blend of both.

See also  5 tips to deal with stress in the workplace

What can employers do to make returnships work?

As always, it comes down to the culture of the organisation to properly embrace returnships and make them work.  And as always, this needs to start from the top. Leadership must play an active and vocal part in supporting returnships and flexible working practices.

Returnships can only thrive if there is a strong advocate leading them, whether that be the Managing Director, CEO or Head of HR.  It is the people in these positions who can influence culture, educate hiring managers and encourage a more transparent approach to recruiting, developing and promoting top talent across the business.  A great initiative to help alleviate some of the skepticism around returnships is to identify high-performing employees, who took time off during their careers but have successfully returned to work, and share their positive stories. Highlighting these employees can also be inspiring to would-be returners.

Businesses wanting to adopt a returnship programme can base it on their current intern process – there is no need to start from scratch. The application process, duration and contractual arrangements can be the same. Most internships operate on a fixed-term basis and interns will likely be entitled to minimum wage, protection from discrimination and have an entitlement to annual leave based on the period of the internship, as a minimum.

Business leaders who recognise the benefits of returnships and embrace a flexible working culture can use this to their advantage and set themselves apart from their competition when it comes to attracting and retaining the best people from the broadest talent pools.

Maria Miller MP, Chairwoman of the parliamentary Women and Equalities Select Committee – and a mother of three with a 20-year career – is particularly inspirational on the topic of flexible working.  She wants to see legislation to make all jobs “flexible by default, unless there is a strong case for them not be” to better support working mothers.

A change in direction

There is another interesting force at play here though. That of women looking to return to work, who don’t actually want to go back to what they were doing previously. They are keen instead to either switch career entirely or become self employed. Researchers Lovejoy & Stone found many reasons for this in their research but most common are a shift in values, low confidence in employers’ willingness to be supportive of returners, and a lack of flexible roles at mid-senior levels.

Importantly, women’s previous work experience has a significant influence on their decision not to return to the same employer, industry or even career.  Where women have come from working environments where a culture of long hours is the norm, that often presents a huge turn-off for them as they look towards a future career that enables them to continue to play a hands-on role at home.

Crucially, as the millennial generation enter the world of parenting there is a growing demand, from both men and women, for workplaces that offer flexibility so that shared parenting can become a reality.

Those employers who genuinely offer flexible working arrangements without career penalties will be the winners in the competition for the top talent – be that millennials, career returners or parents.