Home / Work and money / Careers / Retirement: is it all it’s cracked up to be?

Retiring hasn’t been about the men leaving the women after dinner for a glass of port and a cigar for some time. Nowadays, its more active meaning is leaving your job or paid occupation. 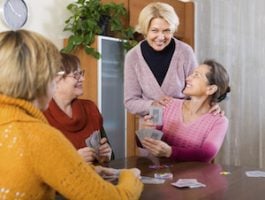 Most people look forward to retiring, believing that it will be a wonderful phase of their lives. There will be freedom to do exactly as they please, holidays and travel to enjoy, no responsibilities and time to rediscover unfinished knitting and other projects that have been lying around waiting for completion.

However, if, like me, you have worked in an environment where the pressure to achieve is paramount and you are also constantly surrounded by people, then retirement actually can be quite traumatic.

I was a head of department in a secondary school where there were about 800 students and some 40-50 staff. In the year before I retired, I was diagnosed with breast cancer and spent four months out of school recovering.

As you might imagine, being ill not only gave me time to reflect on the best way to move forward in terms of ‘getting better’ but also prompted thoughts about why I might have fallen ill in the first place and what I was going to do to remain healthy in the future.

Returning to school in the September was difficult. I had not really been thinking about retirement before – only as a vague concept that I was not yet ready to contemplate – but suddenly, I was not as satisfied with my job and its demands as I had been.

When I was asked in the spring term if I might be thinking of retirement and pushed to give an answer – for the sake of succession planning – I decided that it was time for me to go.

Time passed and we came to the end of the summer term. Retiring then meant that I had the usual six-week holiday before realising that I didn’t have to return to school at the beginning of September.

A new way of life

Initially, I stayed in the habit of waking at 6am. However, after a couple of months of revelling in the thought that I didn’t have to actually get out of my bed and turning over to sleep some more, I began to wake up later and later. Plus, because I knew I didn’t have to keep to a strict schedule anymore, I had also begun to go to bed later at night.

I don’t think I realised just how difficult I was finding things until I was talking to a friend one day who was still working in the school I had left. It was about six months into my first year of freedom – that phrase in itself suggests that work had ‘caged me in’. She was updating me on everything that had happened since we had last met.

I felt almost obliged to tell her how wonderful retirement was. Yes, there was lots of time to do exactly as I pleased. No, I hadn’t really been anywhere yet, but I had lots of plans.

When I got home, I realised the truth of my situation. I was actually lonely and finding it hard to know what to do during the day. I had begun to work as a therapist but this only kept me busy for one day and the rest of the week loomed large. I lost count of the number of games of Spider Solitaire I played while the dust on my furniture got deeper.

See also  How to stay productive in an open-plan office

Without the ringing of the school bell, there seemed little impetus for me to complete tasks.

The other quandary I found myself in was that, after so many decades of activities like knitting, sewing and reading etc being crammed into my evenings and weekends, it just didn’t feel right if I tried to do any of these during the day.

Social interaction was my biggest loss. Going to work was like being part of a large family. It had never occurred to me when I was working that, one day, I might be left without anyone to spend my time with. Every day, there had been more than 800 people around me. The problem then was finding a moment to be on my own.

All of a sudden, those people were gone and I had plenty of space 24/7. Being so busy in my job I had not thought about making friends outside of work, plus I had only been in post for four years and had moved 250 miles to be there.

There are plenty of organisations offering retirement advice but financial planning and how to keep physically healthy seem to be their top priorities.

Many women feel as though they have lost their identities. As with empty nest syndrome, the focus for their existence has flown away. They have all this free time with no commitments, something they thought they had been waiting for all their lives, but they are not happy.

Their thoughts go round in circles, anxiety is rife, they do very little every day, which makes them feel guilty, they are bored, lazy and hate feeling like they do, but they are stuck.

See also  Brand your business like a pro: our top 8 tips

What’s even more frustrating is having to pretend that retirement is wonderful  and completely fulfilling because that’s what people expect to hear. They wouldn’t understand your confusion. You’re supposed to be happy and fulfilled, not tired and fed up.

Everyone wants to be retired, right?

Yes, they probably do, but apparently retirement increases the chances of suffering from clinical depression by around 40%. According to the Mental Health Foundation, those living alone are more at risk and women are twice as likely as men to suffer.

So what would I recommend you do? A healthy work-life balance is paramount before retirement. Try to have activities and friends outside of work. And although it will have implications for your pension, a phased retirement plan might help you adjust to the transition.

Most of all, don’t be afraid to share your feelings and talk through your concerns. You might just discover that your friends have similar issues.

Or here’s a thought, don’t retire! Do what I have done now and start a new career…