Home / Work and money / Financial / Retirement / Do women ever retire? Good commands for dogs and people

Drop it. Leave it. They mean the same thing: just let it go right now. I speak in a calm, authoritative voice, and my dog Lola swallows the dead mouse she found 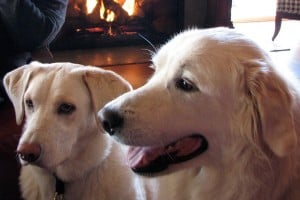 I call Izzie away from the fence where she is terrorizing the neighborhood, and she ignores me. We’ve been to dog school a lot; I must be doing something wrong, I think.

Then I ponder my impatience. Most humans never master ‘drop it’ at all. Oh, we do learn to fake. Forget about it. No problem. Don’t give it another thought, we say, while we chew on old hurts, and think about what we should have said when so-and-so did that awful thing.

In an escalating argument with one’s husband, when you are absolutely sure that you are right and he is wrong, but the stakes are not very high, it is good to drop it after a while. Who really cares if you already told him that people were coming over on Saturday night? The need to prove that your memory is better than his might point to other more complicated issues that are better left alone. On the other hand, ignoring bad behavior and silencing yourself can do more harm than good.

It has been four years since the morning I arrived at work, got called into a meeting, and found myself leaving the building within the hour. I’d just been laid-off in the terrible spring of 2009. I was 63 at the time. After two years of futile job searching, my Medicare Card arrived; I applied for Social Security, and made my retirement official. That does not mean that I immediately embraced all this newfound freedom – resentment over how it came to pass took up too much time.

READ  Do women ever retire? Measuring life in lunches...

Leave it, I told myself. Just try.

But I was still hurt and angry about that day – in particular that that one hour that ended more than 20 years of professional advancement. Knowing that there were millions of people in the same situation did not help much.

Drop it, I repeated.

But then I would subconsciously craft the perfect retort. At the time I’d nodded and said I understood – only later did I come up with the pithy remarks that would have left my dignity intact.

It has taken a while, but, finally, I am learning to retire; to sit, stay, and let go of regrets and resentments in order to discover what I really want to do in this new kind of unstructured life. It is not easy. Some people use their retirement years to travel; my journey has become inward. Yoga is helping and so are the dogs – they already know what matters: food, comfort, smells, the pack.

Someday I hope to train them to leave it when there’s a porcupine or dead mouse nearby, but allowing Lola to gather information from the dew by using her great long nose to sniff each and every blade of grass is something I can live with. I wait and notice that it’s a beautiful morning. I wait and remember that there’s no rush, no morning meetings, no deadlines, no false urgency. I am grateful. It’s a new feeling.

And then there’s Izzie the Great Pyrenees, bred for centuries to guard her flock. We are that flock, and she will bark to scare away anyone or anything she sees as a threat. Efforts to silence her are futile. She barks when people walk by the house. She barks at other dogs. She rises up against the gate, looking like a lion. I start to scold, and then drop it.

READ  Pensions: what do the new changes mean?

Thank you, I say instead. Good job.