It’s a widely misconceived assumption that family law disputes always end up in the court room. 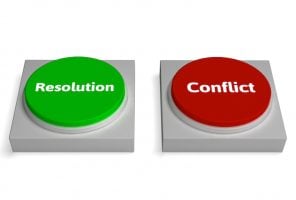 But while litigation through the courts is one way of achieving a solution, there are also a number of alternative forms of dispute resolution which can provide a more informal and cost-effective alternative to the traditional court process.

The different forms of dispute resolution can be divided into two main categories:

Which form of dispute resolution is likely to be best will much depend upon the circumstances of the particular case in hand.

Below is a broad summary of the main forms of alternative dispute resolution and what they involve.

Arbitration, like the courts, is a process which results in a binding decision being made. Arbitrations can be used in a family context to resolve financial or property disputes arising from divorce/separation, the breakdown of civil partnerships, and co-habitation disputes.

A sole arbitrator will be appointed to hear the case and then make an award in writing and stating the reasons for the decision. The parties are able to choose their arbitrator from a list of qualified family law specialists, ranging from experienced solicitors to retired judges.

In entering into arbitration, the parties agree to be bound by the award, though most parties will also obtain a court order to mirror and confirm the terms of the award as this ensures it can be enforced.

Collaborative law is a form of dispute resolution where specially trained lawyers acting for each party resolve cases through a series of round table meetings. This process is a voluntary and confidential method of resolving disputes. The parties each sign up to a participation agreement which commits them to resolving their dispute without involving the court, apart from to approve and formalise any agreement reached.

The process entails a series of without-prejudice negotiations, which are conducted through four-way meetings between the parties and their collaboratively trained lawyers. This encourages a much more informal and relaxed approach towards dispute resolution than the court process. The parties are able to retain control of the process and its outcome. In contrast, the court procedure provides the parties with little control over the process and ultimately, if settlement cannot be reached along the way, enforces a binding decision upon the parties.

Collaborative law can be used to resolve any family or relationship-related issue. It is, however, most commonly used to deal with financial disputes resulting from divorce or separation.

The collaborative process seeks to promote a better ongoing relationship between the parties rather than the adversarial and often damaging approach which is taken in litigation. It also often takes significantly less time than the traditional court process to resolve disputes and is generally less expensive.

READ  What is parental responsibility?

Mediation provides a flexible, voluntary and confidential form of alternative dispute resolution in which a neutral third party assists the parties to work towards a negotiated settlement.

The mediator cannot impose a binding decision on the parties, who retain ultimate control of the decision to settle and the terms on which settlement is reached. The mediator works as a diplomat, facilitating communication and discussion between the parties by identifying potential solutions to the issues in dispute. It is important for the parties to recognise that the role of the mediator is not to provide legal advice.

In contrast to the traditional court process, where a judge is allocated to a case by the court, the parties have the freedom to appoint a mediator of their choice.

The parties will be asked to sign up to a mediation agreement which confirms their willingness to engage in mediation as a means of resolving their dispute. It also confirms that the mediation sessions will be conducted on a confidential and privileged basis, i.e. the content of the discussions cannot later be referred to in any other proceedings.

So going to court is just one way to resolve disputes – there are other, more informal and more cost-effective options you may wish to consider first.

The Lester Aldridge family team deal with these issues on a daily basis.

If you would like to discuss any aspect of divorce,

separation, arrangements for your children or wish to protect your assets prior to getting married, contact the family team on 01202 786161 or email jane.porter@la-law.com.