It was like any other day on our holiday, but with a celebratory mood in the air. It was 2005 and the UK had just won the bid to host the 2012 Olympics. 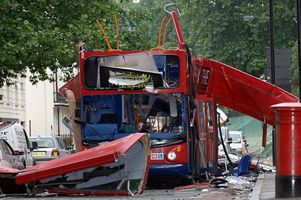 My partner Bryan and I had found a good offer on the internet at a hotel in Shanklin, The Isle of Wight, for a week in July. We left, excited, neither of us having been to the IOW for years.

I had holidayed there as a child but my partner had never visited the island. We were delighted with the hotel and the food was fantastic. We felt truly blessed. Until….

I was walking the streets of Sandown. The sun was shining and I was shopping, popping in and out of charity shops. I had temporarily discarded my Other Half to the delights of his photography.

Somewhere between 10 and 11am I went into a shop where a radio was playing. The programme was interrupted and the newscaster was telling of bombs in London.

On the Underground no less.

For a brief second I didn’t take it in but then the realisation hit me. I have a daughter, Hayley, living in South East London who commutes to London Bridge each morning. My heart missed a beat. I froze.

The names of the stations meant nothing. Only the word ‘underground’. There had been three bombs on different underground trains and one on a bus at Russell Square. I didn’t think Hayley had mentioned Russell Square.

But I knew she’d phone when she heard the news, knowing that I, her dad and her sisters would be immediately worrying that she was caught up in the blasts.

But meanwhile I could phone her. Or so I believed. But that wasn’t the case. I tried her mobile only to get an unobtainable sound. Over and over and over again. For hours.

READ  Sometimes we have to think about the unthinkable

I was completely distraught. I found my partner, gabbled something and he gathered what I was trying to say.

We went in search of news. But we were on holiday. We had no landline, no television, no access to information. In 2005 there was little to enable communication. No iPads, no Facebook, no alerts on your phone.

Nothing much at all.

Bryan took me to a television shop where we could watch the ongoing television coverage of the London bombings, now being called 7/7. We stood there watching and I kept phoning her mobile number. I phoned her sisters, asking them to let me know if they heard from her.

The presenter said all the mobile phone bands were down, so no mobile phone coverage out of the London area. Whether this was for security I will never know.

Those worried about relatives were advised to phone a certain number but something told me not to do this. Deep down I felt sure that Hayley was safe. I thought, as her mother, I would know instinctively if she was dead. I gave birth to her after all. And I didn’t feel that then. 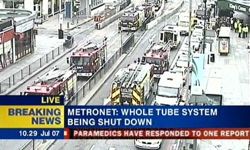 We decided to continue our day but returned repeatedly to the television shop to watch more updates on their demonstration screens. Eventually, after what I later described as the worst day of my life, we returned to the hotel.

I got a call from my American pen friend, sympathising. She knew how we all must feel in the UK as they experienced the disaster and tragedy that was 9/11.

We talked but I was almost mute. I still hadn’t heard from Hayley. She said she’d sign off so I could take a call from her if necessary.

Then something amazing happened. Some time that evening I received a call from one of my daughters with news that Hayley had been in touch.

She would not have been on that route. She usually used an overground route. Didn’t we know?

No, we just knew she worked and travelled in London. Strange as it seems now, she left her bag on a train and went back to get it. She then used an underground train but this one came to a sudden stop and went no further.

All trains had been halted. No underground trains were going in or out of London.

My daughter knew we would all be worried but could do nothing about it due to lack of mobile phone signals.

She had to walk to work and then, at the end of her day, she had to walk home. There were no trains, few buses and everyone was walking, walking. Miles and miles to get home.

But I had the news I so desired. My baby, my youngest daughter, who I had nurtured, breastfed, weaned and watched over as she made her early mistakes, until I could protect her no longer, was safe. That was all I needed to know.

We enjoyed the rest of our holiday safe in the knowledge that one day soon I would hold her in my arms, give her the biggest Mum Hug of all and tell her I loved her. 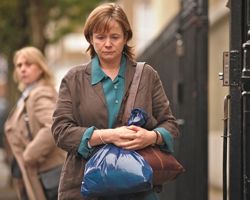 But that was denied to many mothers that day. Julie Wilkinson is one example. I watched the programme ‘A Song for Jenny’ about the death of her daughter and the emotion I felt was intense. This could have been me.

But for some quirk of fate, the loss of a handbag, I could have been denied the last ten years of Hayley’s wonderful stimulating company. I would not, today, enjoy all the books she recommends (she understands my reading preferences so well), have the pleasure of the company of her and her wonderful partner and the gorgeous two grandchildren she has had since 2010.

On this anniversary of 7/7, there must be many mothers whose children lived, travelled and worked in London in 2005 who rate themselves fortunate. But there are 52 families for whom the news was devastating.

Fifty two families who will not see their relative’s children, grandchildren and successes.

As we embarked on our annual Family Camp with my three daughters and their children, I felt so lucky that 7/7 did not rob us of one of them.

Book available as a paperback or Kindle.

Julie Wilkinson wrote A Song For Jenny. It is available on Amazon as a paperback or on Kindle.