Marc Lazarus on the musical achievements of Laura Nyro, and why she never quite made it into the limelight 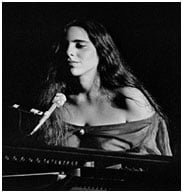 The late 1960s produced arguably three of the greatest female singer/songwriters of all time. Two, Joni Mitchell and Carole King, are known to anyone with even a passing interest in music, but the third, Laura Nyro, remains as she was during her lifetime (she died of ovarian cancer in 1997): lauded by her devotees and peers but otherwise relatively unknown.

There is a stark contrast between the artistic respect Nyro commanded and her relative lack of commercial success. Despite recording 11 albums she never had a Top 40 single or won a Grammy Award. On the other hand she was inducted into the New York Music Hall of Fame in 1990 and the Rock ‘n’ Roll Hall of Fame in 2012.

What therefore makes Nyro’s work so special and still valid enough to recommend to you today?

At a time when Mitchell was working in a folk tradition that moved in later years to a much jazzier approach, King and Nyro were writing superior pop songs. What makes Nyro’s work different is that her pop songs are often lyrically complex, incorporating a variety of musical styles that delivers very much an ‘adult’ version of the more accessible work of King and other mainstream singer/songwriters. That is not to say that Nyro’s material is not melodic or catchy in the way that the best pop songs should be, but these were songs to be sung not played.

Musically Nyro used everything from world class jazzmen such as the late (and very great) saxophonist Michael Brecker to a simple piano and three-part harmony group, stopping off at straight rock somewhere in between. However, in contrast to many (including Joni Mitchell), Nyro did not mix the styles but rather delivered each song or album within a specific musical context.

Nyro did not possess a voice as sophisticated as Mitchell’s or as readily accessible as King’s, but in spite of a limited range and depth what shines through in her work is a sincerity and belief in what she is singing.

Unlike many singer/songwriters Nyro was not averse to doing cover versions, particularly of Carole King songs or re-working her own songs across a number of albums. The effect is that whatever a listener’s reaction to any particular album you can be assured that a familiar friend will be coming along shortly.

Most of Nyro’s albums remain available but two personal favourites of mine are Eli & the Thirteenth Confession (1968) and Laura: Live at the Bottom Line (1989). In truth there is probably no such thing as a bad Laura Nyro album.

If you want something different and fulfilling, give her a try. She may not change your world, but she might just improve it a little.