One of the best parts of my job is helping people back to full strength and health, both mentally and physically. 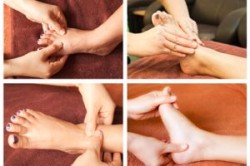 I treat people of all ages, and even after ten years I still get a huge buzz from what I do.

So what is this dream job?  I can’t believe I’m saying this – I’m a holistic therapist.

Why am I so surprised? Well, growing up I never dreamed I’d be doing this.

My school and university qualifications had taken me down the corporate route and I was earning a decent wage but feeling quite unfulfilled, and was becoming increasingly burned out by the long hours and travel involved in working for a large international credit card company.

In 2001 I took voluntary redundancy and spent a lovely year taking some time back for me, getting married in Italy and throwing myself into doing up our house. At the time we owned a relatively modest 3-bed semi-detached so I soon found myself running out of projects (and money!).

By 2003 I was ready for a new challenge, but wasn’t sure what on earth I wanted to do. Then a close friend suggested I do a course on massage therapy as I’d often had treatments myself and alternative therapies had helped me through a period of ill health and stress a few years earlier.

I thought it was a great idea for a bit of ‘fun’ and enrolled myself on an Anatomy, Physiology and Massage course. After one week I was hooked!

It was so lovely to be studying a subject I was genuinely interested in and that could give such direct benefits to people. I went on to study other areas of holistic therapy, including reflexology, Hopi ear candling, diet and nutrition, as well as more specialised massage techniques such as aromatherapy and manual lymphatic drainage massage.

Reflexology has been the area I’ve seen the most dramatic results. 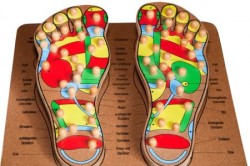 Reflexology is where pressure is applied to the feet, hands, or ears with specific thumb, finger, and hand techniques.

These areas, known as reflex zones, correspond to different parts of the body.

This type of therapy dates back as far as ancient China, India and Egypt and the belief that stimulating zones encourages your body into healing itself. Although there’s little scientific evidence to back it up, it’s becoming increasing popular and some healthcare trusts will now pay for treatment for certain conditions.

I believe it’s an excellent way to help balance your hormones if you’re peri or post menopausal. Recent research shows that in the ten or so years leading up to the menopause women can experience surges in hormones that can leave them with mood swings akin to a girl going through puberty. I can certainly identify with that.

A combination of reflexology and essential oils such as geranium and rosemary can really help to ease those symptoms and leave you feeling much more calm and balanced. Women have also told me they’ve noticed an improvement in symptoms of headaches, migraines,  joint pain, digestive disorders such as IBS and Crohn’s disease and stress and depression too.

It can also help with infertility, inducing labour and getting stubborn babies to turn into the right birthing position.

In today’s society we’re busier than ever and women in particular seem to have to fulfil so many different roles from day to day. I hear time and time again how women put themselves last on their lists as their time becomes more in demand.

Taking an hour out every few weeks to have a rebalancing treatment such as reflexology or massage can really make a difference to your health and overall sense of well being. For me, it’s not so much a luxury as an essential part of my life.

If you’ve never tried a holistic therapy treatment I really would encourage you to give it a go. I’ve treated people from eight years old to 80, and it offers great benefits.

Whether you’re after pain relief, pure relaxation or a more intensive therapeutic result, there’s a therapy out there.  A good therapist will have the skills and knowledge to tailor your treatment to your specific needs, whether they’re physical, mental or emotional.

After all, as its name suggests, holistic therapy aims to treat you as a whole being and not just a range of symptoms.  The secret is to find a good therapist, as the way a treatment is performed can vary quite dramatically between each practitioner.

Holistic therapy was once regarded as something quite vague and mystical but it’s really encouraging to see it’s now widely accepted in modern society, especially as more research is showing its benefits and regulatory authorities are putting their stamp on it. I really hope to see more referrals coming from doctors to holistic therapists in the future.

I can’t believe it’s now ten years down the line and I’m still enjoying practising holistic therapy as much as the first day I started.

I’m always amazed and delighted (though shouldn’t really be surprised as I know from personal experience that these therapies really work!) when I hear such great feedback about how much better people feel following their treatments.