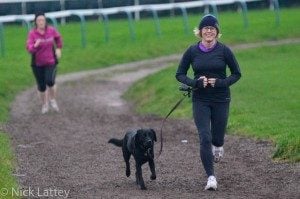 I’ve got too much to do, it’s too cold, too wet, too anything! In fact the excuses I’ve come up with for not going running would score top marks for inventiveness. That was six months ago. Since then a lot has changed. I’m regularly running 5k with my black lab Rosie and I’m planning to step that up to 10k, what’s more (and I still can’t quite believe this) I’m enjoying it!

The turning point? Hearing the stories of how other women I’ve met have used it to cope with whatever life has thrown in their path.

Di Fox has run the London Marathon, half marathons and taken part in Race for Life. At the age of 49 raising funds for Cancer UK took on a different meaning. The personal trainer from Worcestershire  was diagnosed with breast cancer. She wanted running to be part of her recovery plan. Di’s usual routine of three 5k runs a week continued through chemotherapy albeit at a slower pace. After surgery and radiotherapy she had a four week break from exercise but as soon as her doctors agreed, she was back in her running shoes and off out.

“Some days I mixed up my running and walking. I was surprised how quickly I returned to full fitness. I didn’t want to stop my exercise because I had cancer and it helped my mental stability to keep it up while I was going through the treatment. It felt so good to switch off and just run.”

One of the secrets to avoiding injuries is to buy a pair of supportive running shoes. Di calls them ‘a wise investment.’ Top of the range branded trainers can cost £100 or more but there are plenty for half that. If you’re thinking of going running for the first time or you’re getting back into it, Di suggests interval runs;

“For your first run aim for a twenty minute circular route then walk for five minutes to warm up run for 30 to 60 seconds or until you are out of breath, then walk for 30-60 seconds. Then build up to intervals of 90 seconds. Walking isn’t cheating, it’s a way of building up stamina and even if you’re already playing other sports you need to build up running muscles. To avoid injuring yourself don’t increase the distance you run by more than 10% a week. Start gently and build up.”

Just as important as building up stamina is stretching out afterwards. Di encourages runners to spend at least five minutes stretching every time they’ve been out. The NHS livewell website has pictures of how to stretch if you’re not sure, as well as podcasts. Drinking water regularly keeps you hydrated and if your mouth gets dry take a bottle with you and have sips as you run.

This routine helped another runner who’d been beset by injury and illness, get back into shape. Following treatment and surgery 51 year old Julie Townsend, a support worker for the mental health charity Mind, started by walking then running on a treadmill for five minutes at a time;

“It was mentally hard to start running again after my cancer treatment, I got out of breath, felt sick and my body ached. But I love being outdoors and a friend encouraged me to join parkrun. I signed up and run 5k every Saturday now. People clap as you go round. It’s a great atmosphere, really encouraging. If I feel up to it I go for a personal best time, if not I run at the back and other runners who’ve finished come and support me. That’s made all the difference for me.”

The timed runs are free and organised by volunteers in open spaces not just in the UK but worldwide. Registration is online and you print off a barcode and take it with you. At the end of the run it’s scanned and you get an email with your time and position. 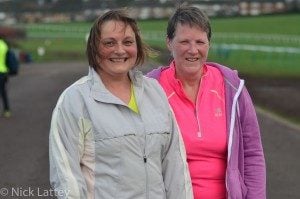 When Julie’s running partner Sarah Down opened her phone to show friends her holiday pictures she hardly recognised herself. In her late forties she had gradually been putting on weight as she’d stopped exercising.

“In my 20s and 30s I was always active, running and skiing but as my work and lifestyle changed I started putting on weight. But it wasn’t until I saw those ‘photos that I realised what had happened.”

Sarah decided to look at what had worked for her in the past. She pulled out her old running kit and trainers. 18 months on she’s lost two stone in weight and slimmed from a dress size 16 to 12.

“I’ve don’t like the idea of dieting but I have cut down the size of my portions. Running has been the key to losing weight and keeping it off. I joined parkrun and met Julie and I’ve done more than 50 runs, including two in the humidity of Florida while we were on holiday. The first thing I pack now is my bar code and running shoes! It’s addictive but what a great addiction to have!”

This feel-good factor comes from the release of chemicals called endorphins, reducing our perception of pain and triggering positive feelings. There are benefits not just for us but also for our pets. I run with my three year old lab. It’s beneficial for both of us, according to Nicola Halliwell from Wye Valley Vets though she adds a note of caution;

“Large dogs, like Rosie, should be at least 18 months old before they go running. They need to be fully grown otherwise they could have hip and knee problems later on in life. But older dogs, any that are unfit and some particular breeds might need a slower pace. It’s best to get a vet to give your dog a health check before you start running to pick up any underlying issues so they don’t become a problem.”

Sarah is working towards a charity 10k. Di has been given the all clear from cancer and Julie is continuing treatment. All three women agree, whatever is going on in your life, however unfit you are just give running a go, you might be like me and surprise yourself!