For some women, self-acceptance seems like an impossible goal to set. For just about anyone, it might reek of ego or self-importance. 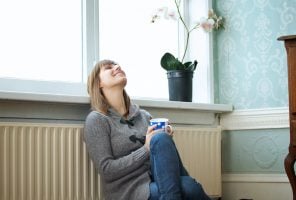 After all, as women, we’re told from childhood to put others first, to sacrifice, to make others comfortable and well-fed and content, and then tend to ourselves later.

Along with this social conditioning comes a steady diet of advertisements and images telling us no matter what we are, we’re the opposite of what we should ideally be. We’re too short, too fat, too tall, too skinny, too light, too dark, too plain, too trendy…

The end result feeds a self-doubt we may not even be aware we’re carrying around with us. Some days it’s more obvious than on other days, but we’ve all felt it at some point. That is, unless we’re one of those rare and fortunate ladies who is possessed of a self-confidence which never wavers. Ever.

Well, I’m not. I’ve struggled on every level, at every age. From the unintentionally unkind words of a parent to the hateful taunts of classmates, from the cold, disapproving gazes of potential employers to the cruel criticisms by a romantic partner and beyond – I’ve heard every insult imaginable. Sadly, I all-too-often took those words to heart, even when I thought I hadn’t, until the damage they did cut me down to a point where I struggled to find happiness or satisfaction anywhere.

My own lack of self-acceptance led me to marry too young, to the first man I ever seriously dated. It led me to leave him, too, and then to pursue another unhealthy relationship after that. I had no idea what I needed to be happy, because I thought I didn’t deserve to be. I gained weight, dressed carelessly and drifted from one menial job to another, miserable and unable to write the stories which had, at one time, given me a sense of solace and purpose no matter what else was going on in my life.

See also  How to live the life you want

I finally got fed up with being overweight and, as they say, “got tired of being tired”. Finally determined enough to take action in what I hoped was a positive direction, I joined a weight-loss group. It made sense at the time – there was a location close to my workplace in town and they had meetings at a time when I could go after work. It was perfect!

I only went to four meetings, even though the plan worked for me, and I did lose some weight. During one meeting I listened while others shared their goals and plans for after they’d lost the weight. One woman stood (they were all women at these meetings, although I had seen a few men when I signed up) and said, her voice shaking: “When I lose this weight, I’m going to give myself a special treat. Some new clothes and a new hairdo. I can’t wait until then, because I’ll deserve it.” She smiled, though she looked close to tears, and everyone applauded quietly as she took her seat.

One of the counselors thanked her and said we should all make similar plans – some perk or treat down the road to serve as a motivator. She asked if anyone else had something like that in mind and several hands went up, and a few more folks shared similar ambitions.

I found myself saddened as each woman stood and spoke of herself in disparaging tones, some of them refusing to look down at their own bodies as they talked. Again and again, they spoke of things they would do or buy when they “deserved” them.

See also  The best years of your life?

When my turn came, I stood and suggested that maybe everyone there should consider permitting themselves something nice now, in addition to rewarding themselves later for reaching a difficult goal.

“Why wait to love yourself?” I asked. “If you’re doing this, you’re doing it because you love yourself, right? Allow yourself something nice, now – you’ve already earned it. Don’t hold back until some unknown date to care. Do it now.”

The look the counselor gave me was not particularly friendly, though a number of women applauded me as I took my seat again. Clearly I’d overstepped some boundary I wasn’t aware of.

The meeting resumed and the talk went back to the usual topics, discussing portions and what to do about cravings and how to tally points, etc, etc. All the while I became more and more upset. I hated thinking of these women postponing their lives until they fitted some ideal in their head. I was doing this because I loved myself, not because someone else thought I should do it or some pressure from society demanded it.

It took time before I realised I had crossed a boundary – but not the one at the meeting. I’d gone from actively loathing myself (a habit I’d had since my teens, when low self-esteem took over) to giving a damn about my own happiness. I did things I wanted to do, because I enjoyed them. I allowed myself to enjoy them, and it felt great.

Miracle of miracles, I started trusting myself and my own judgment. In time, I moved to a new place, broke off a long-distance relationship which wasn’t working, quit a job which was draining me emotionally (and held no promise of a future) and found myself feeling inspired again. I began writing a novel and shared it with a few good friends and some co-workers at the bookstore where I’d started working.

I wasn’t making much money and didn’t have a clear idea of where I was heading in the grand scheme of things, but I was happy. In fact, I found I was actually serene, which wasn’t a word even my best friends would have used to describe me before that time.

Eventually, I made a decision: I would be happy with myself, and happy in my own skin. I wouldn’t allow others to make me feel worthless any more. I would love myself and that was good enough. It still is.

Of course, I don’t always manage this. I have bad phases and good ones. I’m just like anyone else in that way. But the best parts of my life didn’t happen until I allowed them to. They couldn’t come to me until I was willing to accept them, by first accepting myself. When I quit allowing others to dictate how I thought of myself, I was able to grow and change in the ways I knew I needed to. In many ways, that was its own reward.

But there were other perks: I’m in Italy now, married to a wonderful guy (who has his own quirks, naturally) and struggling along as a writer in the best way I know how. In spite of the ups and downs – and there are many – I’m happy, which is something I never thought I’d be.

And I deserve it, which is something else I never thought possible, once upon a long ago.