Home / Happiness / Family / Proud to be a PANK

Which stands for ‘Professional Aunt, No Kids’*. 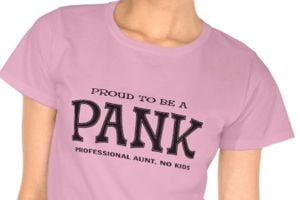 As usual, this term has come across from America.

I’m told that PANKS are increasing in numbers and are a group of women who don’t have children but choose to lavish gifts and attention on the offspring of their siblings and friends.

I’m not sure if there is an equivalent for men but I suppose if there is it would be PUNK – much cooler, don’t you think?!

Having made a conscious decision not to have children, when my sister’s two girls came along I was surprised how quickly they became a significant part of my life.  It has, however, been a steep learning curve ever since.

I was horrified at the thought of being called aunty.  And despite being over 30 at the time, I really couldn’t see myself as an aunt. I was very keen not to be called aunty and was so successful in my propaganda that for a while they thought my name was actually ‘not aunty’!

So over the years, what kind of cool things can an aunt do to entertain nieces as they grow up? 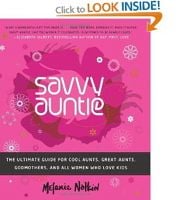 Available as a book or on kindle

Eating out has always been something my nieces have enjoyed doing, even when they were very young.  There’s never been any pushing of food around the plate or refusing to eat anything unless it was their favourite colour.

They’ve always liked to go to decent restaurants with me – however, a low point was one trip to a quiet little Italian restaurant in a pretentious area of my home town when the five year old insisted on singing hymns in a loud voice throughout the meal.

When admonished on the way home for her challenging behaviour she responded: “It’s your own fault.  Don’t you know we are children?  You should have taken us to McDonalds.”  She had a point.

Trips to the cinema have generally worked well but a visit to see The Boy in the Striped Pyjamas was perhaps a mistake.  I was totally engrossed until I realised my nieces had been completely traumatised by the ending, where eight-year old Bruno meets his death in the concentration camp. They still mention the experience years later and it was quite some time before they trusted me to choose a film again.  After a lifetime of Hollywood feel-good it was their first experience of a more grim reality.

The next time I went to the cinema with them, I encountered a far more cynical attitude.  I was horrified that when challenged about her age my niece was able to give a confident but completely fictitious date of birth without even the bat of a heavily mascaraed eyelid.  She clearly had done this before. Where was the sweet innocent child I knew?

Trips into the great outdoors haven’t been quite so popular. Teenagers seem to be allergic to fresh air and mud.  I was keen to show them the delights of the Peak District one beautiful summer day. They clearly didn’t get the charm of the place and thought it was far too much like hard work.  My youngest niece is the only person I know who is convinced that she ‘hit the wall’ walking up Mam Tor (all 517 metres in height). They now only bring heels when they come to visit me, so there’s no way I can take them walking.

When they reached their teens, my nieces hit on the idea of girls’ weekends away.  They have a list of UK and European cities which we’re gradually ticking off.

Now, a major issue with taking teens on city breaks is what to do with them in the evening.

In any major city centre the pubs have bouncers and under 18s aren’t allowed.  So once the meal is over what do you do? I should have thought about this in advance.

Thank goodness for Tesco Express where we stocked up on wine (for me) and Krispy Kreme doughnuts (for them), went back to the hotel and listened to their latest choice of music on the iPod docking station thoughtfully provided by the hotel.  The speakers throughout the hotel room gave me no respite, even in the bath.

As I sank into a stupor with my bottle of Chablis, surrounded by bath bubbles, I reflected on whether I enjoyed being an aunt. Yes immensely, but please don’t make me a great aunt just yet.

Now that really would make me feel old…