Sugar and spice and all things nice, that’s what little girls are made of. So the nursery rhyme goes. 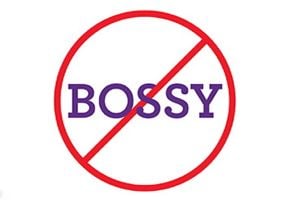 But do we want girls to be seen as sweet little things, or do we want them to pack more of a punch?

Well, a campaign was launched by powerful American figures, predominantly women, which they believe will change the way girls will be viewed by society.

So what is this life-changing campaign? Well, it’s to ban a single word. Bossy.

On the face of it, the Ban Bossy campaign, launched by Facebook COO Sheryl Sandberg and spearheaded by the hugely popular Beyonce, is admirable. Our little girls are called bossy, our little boys are called leaders. This is, they claim, having an effect on the number of girls growing up to take positions of responsibility and power.

When a little boy asserts himself, he’s called a “leader.” Yet when a little girl does the same, she risks being branded “bossy.” But to me, as a writer, it opens up all kinds of other questions. How can one word be so powerful that it affects our children’s perceptions of themselves? Is it just the word ‘bossy’ or is it a whole host of other negative words and phrases that shape the way girls (and women) view themselves.

I have two small daughters who are feisty and independent little souls. Have I ever called them bossy? Yes, I have. As in ‘stop being a bossy boots’, which they think is hilarious. They are also stubborn and wilful and funny and intelligent, and at the ages of six and three respectively both hold their own strong opinions about life.

I’m not really in favour of banning words (apart from a few obvious deeply offensive words which are racially or sexually derogative). But I actually don’t think this campaign is literally trying to ban the word bossy. More, it is trying to change our behaviour and reconfigure our perceptions.

I’ve been called bossy in the past, and no doubt will be again. I like to be decisive, proactive, opinionated and risk taking, and perhaps these are the kinds of words we should be using instead. One of my all-time favourite phrases is ‘no guts, no glory’ (one I often have to repeat on loop before pressing ‘send’ on an article).

Campaigns like this are great in raising awareness and bringing new thinking to the fore. But let’s throw a few other thoughts into the mix. A child who is dominant isn’t necessarily going to be a leader. A quiet child may go on to great things. Boys shouldn’t be forgotten – they need encouraging too.

So should we be banning words like ‘introspective’, ‘hyperactive’, ‘average’ ‘unassuming’ and ‘demanding’? Won’t these words also affect our kids? (I’ve just referred to mine as ‘stubborn’ and ‘wilful’ – should these be banned too?!).

My kids are at a lovely age where their future is ahead of them. One wants to be an actress, the other a princess (she’s three). I have no doubts they’ll be exactly what they set out to be, and me and their dad will encourage them in anything and everything.

READ  How do magistrates deal with domestic abuse? A rough justice?

This campaign can do great things in making us think twice about the way we speak to each other and our children. The language we use, the perceptions we have. Let’s celebrate our kids being feisty, interesting and diverse.

As the gorgeous Beyonce says, “I’m not bossy, I’m the boss.” And I’m certainly not going to argue with that…

Encourage girls to lead – will you take the pledge?

You’ll find more about the Ban Bossy campaign at www.banbossy.com 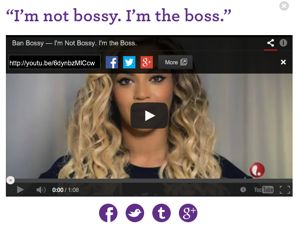