It’s time for another mammogram, and I really don’t want to go back there. 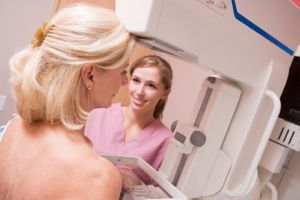 Three years ago I had my first mammogram. I’d been dreading it. But my gran had lived through breast cancer – discovered in 1962 aged 64, mastectomy, lived until 92. My mother had it too, aged 58, lumpectomy, and lived to 82. So I thought I’d better go and get it done.

I was dreading it because from my teenage years to my 40s, I’d had the kind of breasts which stung with pain if they were so much as accidentally nudged. I could only do sport with them strapped down and immobilised. The idea of sticking them in a kind of scanning sandwich toaster made me feel faint. And I worried that if I did faint while standing up, I’d be stuck there dangling from one of them.

Don’t be daft, I told myself. Everyone gets through it. It’s over in no time, and it can’t be that bad. So off I went.

The woman running the clinic was great. Very practical, helpful and calming. Top marks to her.

But I’m afraid it was just as bad as I’d originally imagined, and worse. Could I sit down? No. Did I faint? Not quite. But I had to lie of the floor with my legs up to recover from the dizziness between each bout.

I find it hard to believe that this kind of trauma doesn’t cause breast cancer.

Before I’d been there I could tell myself I was just being silly, and that it wasn’t going to be all that bad.

See also  What is your gut telling you?

Now, I know what it’s like and I don’t want to do it again. I am less afraid of an operation than I am of that machine of torture.

Look, I know I’m being irrational, and I would love to hear from people who don’t feel this way. But try as I might, I cannot – yet – overcome the fear of the pain. Maybe if they’ll let me down a triple gin and tonic first, I might be able to stand it. Or if I could have one of those horse tranquillisers they give you before an operation. The kind that stop you caring about anything at all. Maybe.

Because I’ve had another letter. It’s time to do it again, and I’m poised to refuse.

I’m not hiding from cancer. I’m not afraid of getting a bad result. I just don’t want the test. I regularly do the checking, prodding and squashing myself to see if I can find anything out of the ordinary. I should say that post-menopause, I can now run for a bus with no pain whatever. It was only because my breasts had got over their painfulness that the medical people got anywhere near the first mammogram at all.

I eat my greens. I don’t smoke, never did. I hardly drink. I’m not overweight (obesity is a cause, or certainly a correlation), I exercise, and as stress is a cause I do a load of yoga and I’ve learned to take things more calmly.

I read that if you have sex more than once a month it raises levels of the “happiness hormones” oxytocin and DHEA which help to prevent breast cancer.

(I also read that unprotected sex – with just the one person, stable relationship and all that – is best, but I can’t find the reference.) The other half is very helpful here.

But do I go, or do I remove the stress that thinking about this is causing me, and just tell myself I never have to do it again?

I’ve also read that if men had to slam their bollocks in a sandwich toaster to get scanned for testicular cancer, they’d soon invent a better machine. So please can we campaign for a way make it less horrific?

What do you do?