Home / Health / Dying, death and bereavement / On grief and grieving…

Grieving is a long and difficult process. And for me personally, there is much that I’ve learned and continue to learn from the experience. 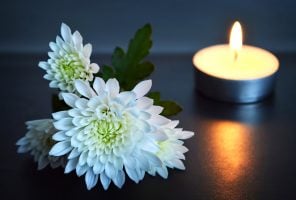 Let’s start by debunking some myths that it ‘makes you a better person’ that it’s ‘about personal growth’ or ‘time heals all wounds’.

Grief is as individual as the infinite number of organisms that experience it. I’ve seen animals as diverse as cats, chickens and gerbils display signs of grieving, but unique to the human experience is the way we communicate it. And sometimes the ability to rationalise, to communicate, gets in the way of actually doing it.

We’ve all seen the person who wants to start a new hobby but instead of getting on with it buys books or magazines on the subject. Well, people do that with grieving too, but what they don’t realise is that it’s happening anyway. It reminds me of Michael Rosen and Helen Oxenbury’s story Going On a Bear Hunt – You can’t go over it. You can’t go under it. Oh, no! You’ve got to go through it! (paraphrased).

Just over two and a half years ago I received a call at 3am telling me that my 41-year-old brother – who had a partner and 16-month-old son – had died of a traumatic head injury. He was sober and standing in the middle of the car park outside his apartment building at 11pm. The police never found how he got the injury and because he was wearing a warm woolly hat they couldn’t tell what hit him. His death remains unexplained.

See also  Ayurveda: how it can soothe common complaints

Ultimately, the details of a death change nothing about the facts of the situation. There is a person-shaped hole torn in the fabric of your reality and it’s never going away.

Even if the person you love is someone you don’t see often, your experience of the world is predicated on their existence, their safety and the normal functioning of their lives alongside your own.

Over the following days I experienced a few things:

Crying. I couldn’t stop. I stopped sometimes, for a while, but then I’d find I’d been doing it again, possibly for some length of time. I simply stopped being embarrassed and got on with it because it wasn’t under my control.

Exhaustion. I’ve spoken to lots of bereaved people over the years and the one thing we all had in common was the bone-deep exhaustion. A weariness that transcended any other kind. Being analytical, I researched it and thought about it and realised it was to do with the constant reassessment of everything. That person-sized black hole meant that I had to change how I saw everything. My world was now different because one of my three siblings was no longer here.

Powerlessness. You have no control of how you respond or of the fact your loved one died. There was nothing, ultimately, you could do. We predicate our safety in the world on our ability to protect the people and the things we love. Sometimes we are unable to do that and someone dies and that’s sickening. You may have heard of the five stages of grieving, postulated by Elisabeth Kubler-Ross in 1969. These are: Denial, Anger, Bargaining, Depression and Acceptance.

Well I’ve no idea to be honest. I do remember thinking “Perhaps they got the wrong person, maybe this person stole my brother’s wallet and they have the wrong name”, but I don’t remember being angry. I do remember standing in the shop where I worked at the time thinking “Soap is totally irrelevant, just go home and think about what’s important”. I took some time out when I realised I couldn’t cope. I’ve been sad but I can’t say I’ve been depressed. Have I accepted it? Who knows? I sometimes think “Oh, that would make a great present for Sam” and then I remember.

What can you do for someone who is bereaved?

Well, on one hand nothing and on the other hand there are many things.

Be in contact. Even if they don’t want to talk now they will appreciate that you made the effort. If everyone thinks “Oh I don’t want to bother them” then a bereaved person will get very isolated.

Help out with food. I found myself incapable of prioritising for a couple of weeks. I simply couldn’t put a meal together. Good friends made dinner, fed us and understood I didn’t want to stay and chat. Someone came over and cleaned our kitchen and put a meal on. These people had also lost someone in a violent way and they knew. Sometimes you don’t eat the food people generously bring because you just aren’t hungry but it’s there and it’s so, so welcome.

Talk about the person who died. You cannot remind us. We never forget. All you can do is let us know you haven’t forgotten either and that makes it easier to bear.

Understand we may not wish to explain about the death. Sometimes putting it in words is beyond painful. Other days we can talk about it quite openly without trauma, but when the veil is thin and we feel sad it can be like stabbing yourself in the heart. It isn’t that we love you less, it’s simply that we cannot open another vein just then.

So ultimately what have I learned? I learned that my brother died and that coping wasn’t something I did but something that was forced on me by the world just going on like before while I stood and watched.

There is absolutely nothing you can do to make it better or make it go faster it just goes. And sometimes you’re going to be ok and sometimes you aren’t but that is ok in itself. And perhaps this is the only wisdom I’ve gained from the experience.