Home / Time off / Travel / Notes from the Auvergne: part 2 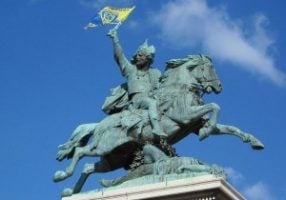 The professional rugby union team for Clermont Ferrand, ASM, began life in 1911 when Marcel Michelin gave workers at Michelin the chance to get a taste for physical activity, and its continuing popularity has ended up creating a team which plays a major part in the life of many here in the Auvergne.

One quarter of Clermont’s population is a supporter, and it is not just locals but also expatriates and Frenchies from other parts of the country who are fans. It is the main weekend activity and the stadium is full for every home match. Forty thousand people squeezed into the town centre’s main square recently to watch the European Cup final relayed live from Dublin, and charter flights were put on for 6,000 fans. Even though they lost, and have just lost the semi final of the Top 14 championship as well, the loyalty of the fans, known here to be the best in France, doesn’t waver.

One of my neighbours is extremely passionate about the game and team – it clearly runs in the family, as his father introduced him to the game and it has been passed onto his young son. He proudly showed me photos of his children posing with players. To him the game displays decent values such as teamwork, hard work and respect.

The team has a reputation of respecting its competitors, whatever the outcome of a game, as well as being approachable to their fans. I once had the pleasure of meeting a player – Brock James, Australian, built like a brick house – and his dog, as it had run into our kitchen and my youngest at the time was terrified of dogs. In strolled a very cool Mr James. I have to admit the size of his shoulders was pretty impressive ladies, and a girlfriend of mine who was there was definitely trying to dazzle him with her smile.

Coached by a former player, New Zealander Vern Cotter, the team has a mixture of nationalities, including Australian, Fijian, Argentinian and South African. High salaries attract international players but rugby laws here insist that 60% of its team be made up of French players. One of them is called Elvis, which I find pretty cool. Sponsorship plays a big role, including Michelin, naturally, but nearly 500 small businesses are involved as well, so there is a real link between business, the team and the local economy.

When they did win the Top 14 in 2010, after approximately 10 attempts, 60,000 went to the city centre to show their love and support and see for themselves the “Bouclier de Brennus” – the Champions Shield. Celebrations went on for days with players visiting Michelin’s head offices to allow fans to meet and congratulate them. Some players are real eye candy, so there were a lot of swooning, middle-aged women heading towards them according to my husband, who had gone along with his copy of the regional paper to be signed “for posterity”.

Every time the team get close to a final, the city gears itself up by decorating all the shops and streets – you will see most shop staff wearing the team’s colours of yellow and blue, with the theme continuing in their displays, such as macaroons in the same colours in the patisseries. The team flag flies just about everywhere, and the build-up is almost tangible. So, here’s to next year and the hope of winning a championship or two!