Home / Time off / Travel / Notes from the Auvergne: Part 1

Our latest series on living abroad 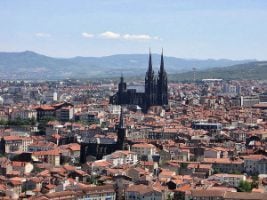 When we moved to France in 2001 I felt I was going on an adventure and was happy to leave my old life behind. My husband had joined the tyre manufacturer Michelin, whose head offices are in Clermont Ferrand, the capital of the Auvergne region.

At the time, my French (spoken or otherwise) was rudimentary, to say the least. I managed a shameful U-grade in my GCSE exam many moons ago, and convinced myself I would struggle. I have struggled, still do and have learnt the language more or less phonetically in order to get by. Trying to find a pumpkin one year for Halloween, I mispronounced it to a greengrocer and asked for a big ‘bosom’ instead!

Not working and with a two-and-a-half-year-old, I found it difficult to meet people, especially as my husband was frequently away – having no family support can be tough. I remember listening to The Archers on long wave in our kitchen, desperate for any link with the UK, even though I am not even a fan of the programme!

All of my neighbours, although very friendly and helpful, were out all day, so it was up to me to keep me and my son occupied. We would take the bus into the centre and visit one of the parks, as I was too much of a wuss to drive. Once I felt more confident we ventured to the swimming pool and other parks. Not very exciting, but there was not much else to choose from. Mother and toddler groups don’t seem to exist over here and nurseries and child-minders give preference to working mums. Thinking back in writing this makes me realise it was quite a challenging, time but I tried my best to just get on with it.

The first friend I made was Teresa, an English woman whose parents were visiting and were with their grandchildren in the local park. Overhearing them talking, I plucked up the courage to approach and give them my phone number in the hope that their daughter would contact me. Thankfully she did, and we remain good friends today, even though she moved to Australia five years ago.

She introduced me to the IWC – the International Women’s Committee of Auvergne – which helped in meeting others, predominantly English and American, in a similar situation. At least with fellow native speakers I could hold a proper conversation, have some social contact and start to build friendships, some of which I am happy to say are still going strong.

Making friends with other ‘Michelinites’ does however mean many leave and don’t always come back. You just swallow hard and appreciate the ones still here. When one reaches a certain age, nearly 50 in my case, you make friends quickly and try to make the effort to develop the friendship.

For the past 10 years we have been living in a village, with only French neighbours, some of whom moved in at the same time as us and have become great friends. The French, I think, are a private nation, so it takes a long time to get to know them on a deeper level. One of my neighbours is probably my best friend here, and that to me is proof of the progress I have made living in another country.

I didn’t leave behind a glittering career in the UK, and since living here have tried different lines of work – soft furnishings, English lessons and, currently, selling exclusive stationery products. It can be a battle, as there is more red tape to deal with and less of an entrepreneurial spirit, but I have the dogged determination to keep going and make a success of what I do.

Do I love it here? No, but I do like it. I certainly don’t regret moving, but I do miss the British sense of humour. I rarely have a really good laugh with the French; more of a smile and slight giggle as I tend to find they are a more serious nation than us. But then, I can always watch a box set of Only Fools and Horses or Little Britain to get my sides aching.