Home / Time off / Travel / Notes from a globetrotter: transitions via Istanbul

Elizabeth moves from Beirut to Geneva, via Istanbul. 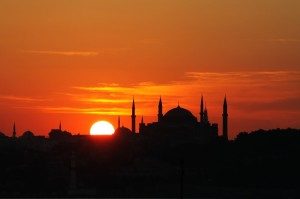 Leaving Beirut felt as if an anvil had been lifted from my chest. Despite missing Lebanon, the conflicts in the region and the ceaselessly escalating violence did not endear me to the idea of living there, or anywhere in the Middle East/North Africa, for the foreseeable future.

I stepped out of Beirut, six months worth of stuff in tow, and found myself easing into the surreality of Istanbul. What a step.

To leave such chaos behind and take a great leap, I felt as if I had plunged from the clouds and ascended straight to Valhalla. Hot, rancid air was replaced by a cool Mediterranean breeze. Salacious stares were traded in for crisp clean nods of a much-welcomed indifference as I walked down the streets.

Deeply divided religious and ethnic neighborhoods collided in one brilliant melee of culture. Entering into the Hagia Sophia and seeing images of Christ and Mary hanging alongside the names of the Four Rightly Guided Caliphs was enchanting and enriching and warmed my soul.

The streets smelled of spices, salt, and the sea and as I wandered the narrow cobblestone roads late at night I saw young people streaming in and out of clubs, flocking to waffle stands for one last midnight treat, while above it all the eerie sound of the muezzin, uttering the call-to-prayer, rose up in the distance.

I fell into Istanbul and fell in love with it in the same step. Truly, I did not want to leave. . 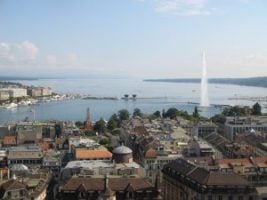 Four days blew by in a rush. Again, on the plane, this time leaving the Middle East behind me. Left behind, but always remembered. The Middle East will hold a particular place in my heart forever.

Beirut to Istanbul, Istanbul to Geneva. Life slowed down more and more at each progression. I sit now in a little chalet with Moroccan carpets on the floors and exposed wood on the walls. The doors to the balcony are open and a cool breeze floats in that pulls all thoughts of sticky heat from my mind and Arabic from my tongue as French falls effortlessly from my lips.

I sit in silence. Silence, which has been unfamiliar to me these past few months. I am new to silence and struggle at first to find a rhythm. Then, after a while, I stop trying, and sink instead into the beat of my own heart. Thump thump. Thump thump. Life is easy. Life is grand.

Because we only have one life, and will only ever be as happy as we choose to be.

I went from a UN career in Beirut to a job as a waitress at a creperie in Geneva, and I can say with absolute certainty that throughout these past few months I have developed an overwhelming appreciation for life’s little, simple things.