Home / Time off / Culture / Notes from a globetrotter: The Berliner Ensemble

The Berliner Ensemble – another taster from our upcoming notes from a globetrotter series. 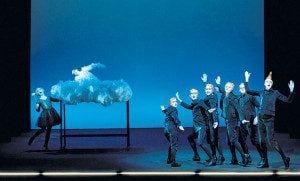 They say that New York is ‘the city that never sleeps’ but, for me, Berlin wins that title

The sun is shining as we lug our (my) suitcases up five flights of steps to a beautiful, quaint Berlin apartment. The weather is warm and the city – the vast, sprawling metropolis – is silent, as if waiting for something, someone, me, us, him.

We attend a play at the Berliner Ensemble theatre. We see Peter Pan, directed by Robert Wilson with music by CocoRosie and I sit there, captivated by the sheer beauty and horror of this epic that only a city like Berlin could have produced.

The sets are dark and the costumes are dark and the make-up is dark and sickening and lovely. Tinkerbell reveals a set of yellow, diseased teeth as she beams at the audience. She jerks and twitches her way across the stage in a black tutu with hints of underlying green.

Wendy bounds after her with mechanical gestures and bats those big, pretty eyes which are framed by lashes as long as the legs of bulbous black spiders. She lifts her skirt up over her knees to reveal legs like splinters and canters around as she sings “to die would be a great adventure”, breathing life – or rather, death – into the ballad.

Peter comes next, flanked by a troupe of lost boys all in black, and the song that accompanies them rises and falls in dreamy, incomprehensible notes that are more akin to screams. I am spellbound by the nightmare, and caught in its grappling hooks as the delicate raptures of childrens’ sing-song voices pull me from the comfort of my reality.

Berlin is unique in this way. Buildings warped by age and decay and a history of violence are now covered in the violent colors of street art and graffiti. ‘Exzess, miene liebling,’ one wall reads. Excess, my darling. I am reminded of the play and the way layers of glitter gleamed from the crest of Peter Pan’s crown as he sang. Glitter showers the stage – its cast, the audience, the air, everything.

See also  The night train to Tehran: mountains and moonlight in Iran

Excess, most certainly. But it is not an excess of wealth or of beauty or of things. It is an excess of life and spirit and motion. The city has soul. It is a tumult of paint-spattered sidewalks and derelict youth dressed in the haute couture of tattered elegance. There is always cheap food and cheaper beer and somewhere to be, though the perfunctory act of needing to be somewhere never matters.

Put down your talisman, because Berlin will guide you into the darkness and you will wander nowhere and find everything as you stumble through the city of excess and decay and glitter and spirit and light.

So come, meine liebling, because tonight will be a great adventure.