Picture this. It’s a sunny afternoon. The sky is blue with not a cloud in sight. The children are pottering, quiet voices competing with the sound of baby birds desperate for a feed from the bird tables of pseudo-middle class suburbia. 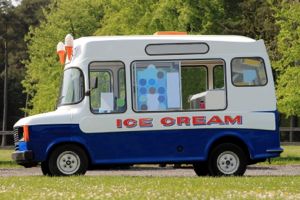 Then, in an instant, it all changes. Squeals of hope pop the bubble of tranquillity.

Children of all ages look hopefully towards the previously obliging grown-up. The reason for this sudden mood change? The ringing chimes of an ice cream van in the street outside our house.

For me, it is a little scoop of childhood memories.

Ice cream has been sold on UK streets since the mid 1850s. It was a popular family treat for households in a time before freezers and could be purchased from the back of a horse and cart, its arrival announced by the ringing of a hand bell. It took another 100 years before the ice cream van we know today took to travelling the streets.

I’m not old enough to remember the early vans, but these iconic vehicles have changed little since their introduction to UK streets in 1958 when a couple of Mr Softee vans began trading around London.

Not surprisingly it wasn’t long for the soft scoop ice cream van to become a big hit and within three years Mr Softee had 34 vans operating across the UK. The competition quickly took off and Mr Whippy, the vans of my childhood, began plying the trade. The ice cream industry had an exciting new travelling outlet that could reach more customers faster than ever before. Competition was strong. Bring on the sunshine.

Today the entire ice cream industry in the UK is worth over £1billion (although I expect less and less is coming from sales through the iconic ice cream van window, as it’s estimated that only one in four Britons buy their summertime treat from an ice cream van).

And on that lovely summer’s day, we were the only ones to buy an ice cream from the van. The vendor sold less than a fiver’s worth of goods, hardly a huge profit.

It couldn’t be more different than when I was a child. We’d hear the chimes, and all the kids would scrabble through leftover pocket money, begging our parents for more, before racing to Mr Whippy parked down on the road frantically hoping we weren’t too late. Running meant the van wouldn’t drive off. Counting out the pennies would guarantee a scowl. 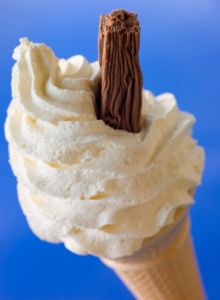 I used to love a vanilla soft scoop ice cream with chocolate sauce liberally dribbled over it. If we were feeling flush we’d add a Cadbury’s chocolate flake to create a 99.

We thought we were so posh. To eat the ice cream or the flake first would split the group, while some would use it spoon-like to scoop the ice cream out. I always saved mine till last, licking the ice cream from it carefully to avoid knocking it to the ground.

With the last morsels of ice cream licked from our lips, even as children we’d debate the origins of the 99 name.

Sadly I can’t remember any of the theories we dreamt up but I am pleased to see that even today the origins of the 99 name remain uncertain (any ideas?!)

READ  Smoothing out the bumps

And now, in the early summer sun, the sound of the ice cream van arriving in our road brings out the child in me. My childhood memory doesn’t match my adult tastes. I no longer buy soft scoop; too few real ingredients and too much air (I can blame Maggie Thatcher for this, as she was part of a British-based science research team that made this economical redevelopment in soft scoop taste and texture). The soft scoop of childhood has been replaced by the mint Feast.

My children haven’t experienced soft scoop yet either. For them, it’s strawberry ice cream on a stick (lollies are much less messy). Their grandfather is a soft scoop fan, so maybe he’ll introduce them soon.

What I do hope though is that I can introduce my grandchildren to the dreamy pleasures of the ice cream van.

Please save this iconic travelling sales outlet. Next time you see or hear an ice cream van, treat yourself and relive your childhood before it melts into history.