Home / Time off / Travel / The night train to Tehran: mountains and moonlight in Iran

My friend Marjorie and I were reminiscing about our life in Iran. In the 1950s we’d both married Iranians who’d been studying in England, and spent the next twenty-five years in the oil-producing area of Khuzestan. 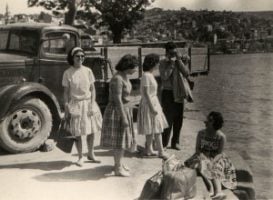 We first lived in Bandar-e-Mahshur, the oil terminal port on the Persian Gulf, surrounded on its landward side by desert, with one dirt road leading to Abadan 200 miles away to the north, and onwards to Ahwaz and the railway terminus. Across the bay was Bandar Shahpour, reached by car, from where a branch line went directly to Ahwaz.

Crossing the desert the train stopped at every hamlet, where small boys clamoured around the windows, holding up trays of fruit, bread, cheese, nuts and jugs of water, hoping to tempt a few thirsty or hungry travellers. More people boarded the train at each stop, loaded with produce to sell in Ahwaz. Soon the carriages were crammed with women, bringing their many children as well as their bags of herbs and other vegetables, not to mention livestock.

A more upmarket train was the overnight sleeper from Ahwaz to Tehran. Although we usually drove when visiting Reza’s family in Isfahan, we once took the night train to Tehran for a short visit to friends. The children were thrilled at the idea of going to bed on a moving train, though I was less enthusiastic at the idea of travelling during the night and missing the wonderful mountain scenery.

The children watched spellbound as the steward converted our seats into two-tiered bunk beds, and demonstrated the wash basin concealed behind the panelling in one corner of the compartment.

There’s hardly any twilight at that latitude: as the sun disappears, darkness descends. This happened while the train clattered through the outskirts of Ahwaz and across the arid landscape of Khuzistan, so there was nothing to do but settle down for the night.

I found it difficult to sleep, and when I saw bright moonbeams streaming in through the window, I gave up and spent the next hour or so watching the changing landscape. The snow-capped mountains seemed to glow in the moonlight, while the valleys disappeared into a mysterious blackness.

When clouds obscured the moon, I settled back and slept fitfully, until dawn found us slowly chugging through the outskirts of Tehran. I was struck by the strong contrast between the enchanting moonlit mountain scenery I had been watching and the squalor of the downtown area we were now passing through.

Breakfast on the train as we slowly approached the terminus was a surprise. Instead of the flat bread, goats’ cheese and boiled eggs which most Iranians then had for breakfast, we were served grilled mushrooms and tomatoes, fried egg with toast and jam. Tea was served though; this is universal.

Tehran overwhelmed me: I disliked the noise, the incessant sound of horns as drivers fought to make their way through the congested traffic. It was a world away from the quiet backwater we had just left. The pavements weren’t much easier to negotiate either, crowds of people chatting and calling to each other, and beggars at almost every street corner. I never really got used to this contrast; poverty and wealth both existing next door to each other all over Iran.

See also  Notes from the Auvergne: Why do the French protest so much?

Our return journey was a joy, however. We left early in the morning, and were able to take in the magnificent panorama as we passed from hilly regions, through the mountain ranges and green valleys, down to the dry and dusty hills and plains of Khuzistan. Reza had a nap with the children during the afternoon, pulling down the blinds, but I sat by a window in the restaurant car, sipping tea and taking in the views.

Reaching Ahwaz, we had ahead of us the crowded train to Bandar-Shahpour, and the short trip back to Bandar-e-Mahshur. Mahshur means ‘salty sea’. After the revolution in 1979, it was renamed ‘Bandar Mahshahr’, or ‘beautiful town’, which it certainly wasn’t when we lived there!