I began my journey to becoming a yoga teacher in November 2019, before the pandemic. 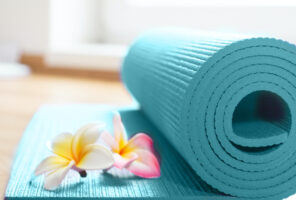 My relationship with yoga started over 30 years ago, but back then, I just went to occasional classes and attempted to get into the various bodily positions offered. Never did I think I’d become a yoga teacher.

Fast forward to the year I turned 60. I had always had the ambition to go on a yoga retreat. I suggested this to a friend, who gladly agreed to accompany me. In the intervening years between, I had married, had two children, moved around the country, divorced, and landed back in my home county.

I had worked (usually a full-time and part-time job) since I was 16 years old, only having six weeks off for each of my children). It was time for ME. I was happily married, my sons were doing well, and I had my own business.

To prepare for the retreat, I enrolled in some local yoga classes and really started to ‘get into’ yoga. But it was still stretching and strengthening. I did not bother with the linking breath with movement aspect.

Italy was amazing, and it really inspired me to continue my yoga journey. Over the next few years, I started attending regular yoga classes. I also attended several other retreats at least once a year and studied zen meditation with a view to teaching. But I decided that I could not commit to teaching a six-week course. It was not the right time for me.

I wanted to retire from my aesthetics and laser business and was struggling to sell it as a going concern. So I decided to sell off the equipment and just shut down. I had downsized my hours. My yoga buddy had seen that our yoga teacher offered a yoga foundation course through The British Wheel of Yoga that consisted of one Sunday a month for 11 months. There was one place left. I almost decided against it, but at the final hour applied and was accepted.

A thirst for learning

The course was to expand my knowledge, with no teaching involved, which suited me as I did not want to teach, and besides, surely, I was too old! It was a great course. We looked at the eight limbs of yoga, the history of yoga, had an asana practice, and we learned the Gayatri mantra. I started to read more about the philosophy and even read the Bhagavad Gita (an Indian scripture) though I did not get it.

Once completed, I had a thirst for learning more. Still unsure about teaching, but surmising that the course would be more in-depth, I started looking at my options. I enquired at a few schools, then came across Yoga Hero in Leeds. The format looked good, and I liked the idea of blocks rather than spreading it out over two or three years. On a whim, I applied and was accepted.

I started to have a few doubts, but these were resolved when I went to the pre-course open day. The studio was in a great position at Leeds Dock area, very hipster with a nice coffee bar next door! Holly was lovely and taught a great class. All the attendees seemed friendly, and I was reassured that it was an inclusive course as her 60-year-old mother had done it previously. It was also clear if you did not want to teach at the end of the course, it was okay.

I have thoroughly enjoyed the course.

The philosophy especially has been fantastic. Sitting in our Satsang discussing many things opened my mind further. My a-ha moment was samskaras and working on releasing them. Despite my professional background being nursing, midwifery, and health visiting with a Masters in advanced nursing, I struggled with insertions and linking movements to yoga postures. I also realised that the more I looked at the yogic texts, there were hidden depths to their meanings.

See also  How to handle a career crossroads

I came into the process thinking that I did not want to teach, but as I have progressed, I have realised that I would like to teach at least one class a week or maybe do quarterly workshops. What sort of teacher will I be? Well, I have been told I have a great voice for getting people into relaxation, so maybe I’ll focus on slow, meditative types of yoga. However, I do enjoy some of the faster sequences for my own practice. I also like the idea of introducing some fun into the classes and maybe mixing in different influences like dance, tai chi, and Qigong. In February next year, a friend and I travel to India to an ashram to undertake a two-week intensive course to become immersed in yoga, which we are both looking forward to. There will be asana practice, meditation, philosophy, and an ayurvedic diet.

As an extra to the course, I attended the Yin Yoga module, which I really enjoyed. I had done some Yin movements from a book I bought, but this course went into depth. It also included some work on posture assessment, which suited my ‘nursing’ brain. Plus it lends itself to one-to-one work, which, again, I am drawn to.

The moment I was dreading came – the teaching assessment. I was really nervous beforehand. It was a full room of people, including some “real people,” i.e., not my teacher trainee colleagues. But the energy was amazing, and I got through it. I was overwhelmed with the positive support and hugs I received. When I reflected on the teaching, I actually enjoyed it!. The same afternoon when Holly described the 300-hour course, I was seriously considering signing up. I feel I have a lot more to learn, and I think the modules are in line with where I want to develop.

See also  Why you need a stockbroker and how to choose the right one...

Never in a million years did I think that I would become a yoga teacher the year I drew my state pension.

I have booked a local hall for one morning a week and plan to do two one-hour classes and offer one-to-one Yin sessions. Onwards and upwards.

Thank you so much to the amazing yoga teachers, and all my lovely partners in crime. And to my wonderful husband for being so supportive.