Home / Health / Eating (Diets or not) / My HERO product: the Spiralizer

As a business-owning mum of two young children, I’m willing to give any kitchen gadget a try which promises to assist me in preparing healthy food in super-quick time. 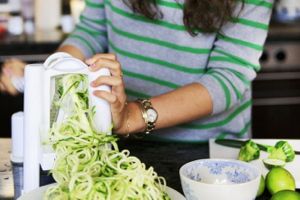 And so it was with gusto that I started experimenting with my newly purchased Lakeland Spiralizer a couple of months ago, after a friend kept raving to me about hers.

The Spiralizer basically uses a razor-sharp blade to turn a range of raw vegetables into noodles, which can then be used as a low-calorie alternative to pasta.

So for example, instead of having spaghetti with your Bolognese, you could have spiralized courgette, sweet potato or carrots instead, and many other vegetables besides.

I have also heard women rave about their children’s new-found love of veg, after they’ve been duped into thinking that spiralized sweet potato ribbons are in fact curly fries.

I haven’t used my Spiralizer for either of the above scenarios. I like my spag bol traditional and in any case eat this Italian-inspired feast so infrequently that I don’t plan on swapping my carb-laden spaghetti for a healthier option any time soon. And I’ve worked hard to train my kids to like vegetables, so I don’t have to trick them into eating them.

Making more of my mid-week meals

What I have used it for, over and over again already, is as a quick and very tasty vegetable accompaniment to a simple mid-week meal. So my staple use of the Spiralizer tends to be spiralized mixed vegetables (more often than not courgette and carrot), flash-fried in a dash of coconut oil and lightly seasoned, accompanied by something like fish cakes, griddled chicken breast, or veggie sausages out of the freezer.

To me, this is the perfect weekday tea. It’s extremely quick to prepare, is healthy, requires practically no imagination or inspiration, yet tastes pretty damn good! 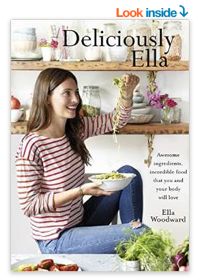 There are so many other recipes that I would love to try when I get a spare half hour. First on my list will be courgette noodles with avocado, Brazil nut, mint and lime pesto from my Deliciously Ella cookbook. Then, the plan is to start ploughing through the millions of online recipes that are out there.

I love my Spiralizer because it’s completely mechanical and dead simple to use. Try as I might, I still can’t get my head round what blade to use for what use on my all-singing all-dancing Magimix blender. But with a single handle to turn, I can work my Spiralizer without needing my husband’s assistance (not very 21st century to admit, but true).

The Spiralizer is a favourite gadget amongst gluten-free, paleo and vegan types. Although that kind of eating isn’t really my thing, I am feeling smug that I am now eating less meat and more veg as a direct result of my Spiralizer, and I know that when I do spiralize, my evening meals are healthier than they used to be.

What I don’t love about it is the unappealing flaccid inner core of the vegetable which remains after you have spiralized and which looks sort of phallic in a really pathetic way! Cleaning the spiralizer can be a bit fiddly too, but no more so than any other kitchen gadget.

I can definitely live with those downsides though and in my mind, the purchase of my Spiralizer was £30 very well spent.

See also  Don’t tell me how to diet!