Botox. Should I give it a go? Why? I wanted a fresher, more relaxed look rather than wanting to appear younger – although that would be nice too.  I read about safety and side effects, and zoomed in on loads of “before and after” photos on the internet. 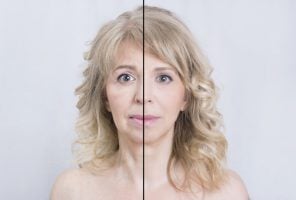 The safety question was more about logic and balance for me. It’s been around for years, only a tiny amount is injected, the potential side effects didn’t put me off and the odds were low enough.

My biggest worry was whether I’d look fake. Or what people would say if they noticed. Anyway, I took the plunge and here’s my diary about how it feels.

The injector, Helen, ran through the information again and explained how it works. At this point I think I could do Mastermind on Botox. We talked about the results I wanted and Helen recommended against having my crows feet treated because it wouldn’t look natural on me. I decided on just my forehead.

Up onto the treatment bed; I sat upright and leaned back. Helen asked me to frown hard, and plotted dots on my forehead. Over the next few minutes, I frowned lots and felt some tiny stings. I hate needles but this was over in minutes and I hardly felt them. The places where she’d pricked bled a bit.

Driving home and for the next four hours, I continually frowned and relaxed as I’d been told, and I didn’t lean forward once. I dabbed away the small dots of dried blood.

I had to wait at least four hours after the injections before lying down. As I had the injections early in the evening, this meant waiting up a bit before bedtime. Paranoia hit lying in bed. I thought that other parts of my face felt numb and was worried that it had migrated to the rest of my face from my forehead. I slept propped up in bed.

I had a busy day and forgot all about the Botox first thing. When I remembered, I checked to see if I could move my forehead, and kept doing it all through the day.

There was no difference in movement at all. No bruising either, which was a big relief but I had a very slight headache – not a proper one, more of a mild hangover. It might have been the way I’d slept.

It still hadn’t kicked in but didn’t stop me going to check now and then. I was starting to wonder if it had worked.

Very pleased so far. My face looked fresh and relaxed in the morning. It did start to feel a little tight across the whole of my forehead on day six but no one mentioned anything different – even my family hadn’t noticed – so it couldn’t look obvious. I suppose it’s like having an injection at the dentist – your face feels like concrete but it looks the same.

My forehead felt a bit stiff (looking back this was the stiffest it got). I had to lift my eyebrows with my hand to put my eye make-up on. One of the possible side effects is droopy eyes so I was praying it’s not that.

I did have fewer wrinkles though and I hoped the stiffness and heavy brow feeling would go away, leaving just the positive effect. I let my tennis partner into the secret – very impressed. She said my forehead looked relaxed and smooth but still had movement, so she wouldn’t have guessed.

I like the look: fresh, smooth, relaxed and the stiffness has now completely gone.

I’m on holiday and ask my family what they think of my Botox. After a few moments searching my face, they asked lots of questions about when I had it done, where and said they hadn’t noticed at all. It looks good apparently but they wouldn’t have known.

Thankfully, we didn’t have a conversation about whether I should have done it. Then again I waited until they’d had a drink and it was forgotten about the next day, so no more questions.

I still have movement evenly across my forehead but the lines have gone. I’m completely free of lines in repose and only light furrows when I’m frowning but there is movement. And it should last for three to six months – fingers crossed.

So I’m happy. It does look fresher and more relaxed and as even those close to me haven’t noticed in a bad way, I don’t think it looks either obvious or fake.

Would I have it done again? Well, as no one noticed there’s no need to say.

There’s a reason I’m staying anonymous on this article. I’d sooner be in the ‘has she or hasn’t she?’ camp.

Follow the advice of the injector carefully. Things can go wrong and I’m sure they do. This treatment should only be done by experts.

What do you think about Botox?  Have you tried Botox and dermal fillers?