Home / Health / Exercising / Motivation? It’s all in your mind…

Many years ago I cracked the secret to getting, and staying, motivated to exercise. 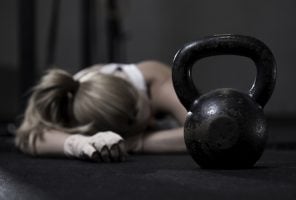 It’s something I began to understand around 15 years ago when I was a regular gym goer. Now I am a powerlifting world champion and world record holder so believe me when I say it works!

The secret is very simply this: do not rely on motivation.

Sounds counter-intuitive, I know. But let me ask you this. How many of us wake up in the morning and think: “Today I shall go to the gym, work so hard that I almost throw up and then suffer with glutes and legs so sore that I can’t sit down for three days afterwards”?

Or: “This evening, instead of going to the pub in the summer sunshine with my friends and relaxing with a drink, I shall reject their company, climb into my Lycra and go training even though the air conditioning is broken and it will be unbelievably hot and physically unpleasant”?

No one. Not even me and I do this competitively.

If you hope that you’re going to be motivated by the physical discomfort of exercise then you are setting yourself up for failure. Doing exercise is the ultimate in deferred gratification.

It will always be more attractive to stay at home and eat a cake than to go to the gym, go out for a run, or commit to a netball team week in week out.

But of course three months, six months, a year later, if we do commit to our exercise plans we see ourselves lifting more weight, running further and faster and being part of a winning team.

And, for me at least, those more enduring rewards are always worth the hard work and commitment of turning up night after night, week after week, year after year. Because it is only by doing something over and over again that you get better at it.

READ  Mother Nature for health: what is green care?

So how do I motivate myself when I would rather stay at home?

Simple. I don’t expect to be motivated so I never, ever ask myself this question: “Do you want to go to the gym today?”

Because the answer, even for me, a world champion, is quite often “No!”

So instead this is what I do. Long before I get to the point of asking the question, I have already decided that Monday, Wednesday and Saturday are the days I will train. There is no debate, no argument and no negotiation. It is Wednesday, therefore it is gym day.

Before I was lucky enough to have a gym in my house I used to train at a gym which was closer to my work than my home, so it was always easier to drive to the gym than to drive home.

My gym going became a habit so ingrained that I would often just get in the car and, on auto pilot, would find myself pulling up outside the gym instead of going home.

And that is the trick, my secret weapon as it were. Going to the gym for me is a habit, a part of my life as regular as going to work or eating dinner. Something which I never question and therefore which I never doubt.

So if you want to stick with your exercise targets, to achieve your goals, don’t expect your motivation to carry you through – because it won’t.  Instead rely upon good old habit which will work every time.