Today, thankfully, menopause is something we’re willing to discuss. But that hasn’t always been the case. 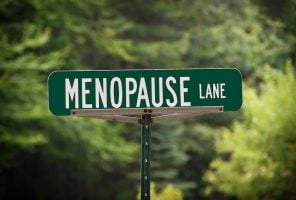 My mum didn’t talk about the menopause, I don’t remember her going through it or having symptoms. I know that she never took HRT but knew of her friends who did. The only comments I can remember as HRT was a new thing then was mum saying: “I don’t understand why they would want to go back to all that, periods every month.” Mum also commented at some point, “If you haven’t had a period for two years you should be safe from pregnancy.”

My first realisation of the change was when I was on an Egyptian cruise, on a day trip to Jordan and I flooded. This had happened once or twice before but when I was due for a period.

This one took me by surprise, so I wasn’t prepared. I had to somehow find a chemist in a predominately Muslim country where they spoke little English in a male-fronted environment. Luckily we found a chemist where a young woman was behind a screen. With lots of eye contact and pointing she understood what I needed.

I had flooded through my clothes, underwear and jeans. Fortunately they were black, but what an uncomfortable embarrassing afternoon I spent. I was in my early 40s at the time. As the months passed the flooding and irregular periods continued, the flooding got worse and worse, and the hot sweats started.

I went to the doctor about the flooding – at the time didn’t know it was or could be the menopause. The doctor suggested the Mirena coil containing hormones to regulate my periods. The village surgery didn’t have the facilities to fit the coil and the nearest hospital to us was over 20 miles away, and I never got around to having it done.

READ  How to sleep well for older adults: overcoming insomnia

A few months later the flooding stopped. I probably put up with it for a couple of years. I used incontinence pads and when Tena pants came in they were a Godsend. I could wear them day and night without bleeding onto the bedding or furniture. My periods slowed down to a light bleed for about another 12 months, but the other symptoms had started by now.

My body was changing before I even realised it was happening. The first thing I noticed was my skin. I have cleansed and moisturised my face and neck morning and evening since my early 20s. Suddenly the cream was being taken in to my skin on contact, I thought the manufacturers must have changed the product, but no, they hadn’t. It isn’t an exaggeration to say I was using three times more.

The colour of my normally very pale white skin changed. I would never hold a tan before, now I have to protect my skin from direct sunlight.

Hair growth was the next thing I noticed. I have very dark hair, which hasn’t started to go grey yet. The hair started to grow on my chin, and it was darker, thicker than usual, dark thick hairs everywhere, upper lip, chin, neck, face, arms, underarms, from the pubic area starting down my legs. Thank goodness for waxing, which I did once a month, using tweezers in between.

This for me has been the worst and most painful thing ever. I went to the doctor about this and I was given something to insert on an applicator, it was about a half centimetre wide and six centimetres long. The pain was so bad even with lubrication that I gave up after three days, and I have a high pain threshold. This meant that sexual activity with my husband stopped, a sad loss.

As a psychotherapist and counsellor, if a woman is presenting to me with menopausal symptoms, I send them to the doctor for blood tests. I would say on average I see two new cases a week which could be connected with menopause. That’s a huge amount of women and families being affected and not being picked up.

We’ve come a long way in talking about menopause, but there is still a way to go for women to receive the recognition, support and treatment they need for their own symptoms.