I always used to look upon the menopause as a far-off thing that happens when a woman ‘gets old’. 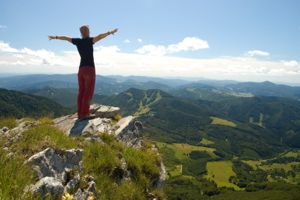 When the monthly hassle of periods ceases and hot flushes make her look daft kicking up a fuss and fanning herself in a room everyone else thinks is cold. Osteoporosis and bristly facial hair were surely the domain of the very old and doddery?

But, during my homeopathic training, I realised there’s a lot more to menopause than meets the eye. I was shocked to discover how massive the changes can be – I’d never even considered there would be emotional issues alongside the more obvious physical changes.

Particularly bemusing was the repeated emphasis upon it being a time of ‘great opportunity and liberation’ for the woman. Not something I had ever associated with growing old. But Dr Christiane Northup calls it ‘The greatest opportunity for growth since adolescence’.

Leslie Kenton also has some evocative words on the subject:

‘The joy of menopause is the world’s best-kept secret. Like venturing through the gateway to enter an ancient temple, in order to claim that joy a woman must be willing to pass beyond the monsters who guard its gate.

As you stand at the brink of it, it can appear that only darkness, danger and decay lie beyond. [But] … as thousands of women from all cultures throughout history have whispered to each other, it is the most exciting passage a woman ever makes.”

Ancient cultures use ceremonies to mark big transitions in life and menopause is often marked that way, too. Spending a little time letting go (marking and expressing gratitude for that which is going), then calling in the new (what you wish to experience next) can have a powerful effect.

It can be as simple as lighting a candle and spending a few quiet moments of thought. Give it a try when you next experience change in your life… you might be surprised how it affects you.

Spending a little time letting go of that which is going, marking and expressing gratitude, then calling in the new can have a powerful effect. It can be something as simple as lighting a candle.In the modern world, we tend to plough on regardless and expect everything to work out. The menopause is one of those times that can make us sit up and take notice. The common ‘monster’ that appears is our unfinished emotional business, things which affected us earlier in our lives, even right back to the last big change, puberty.

See also  The importance of optimism

It will need to be heard and released somehow (if it’s very entrenched you’ll benefit from some support).

Emotions are often linked to other problems surrounding health and wellbeing, so if you’re able to find ways to stop yourself hanging on to grudges, regrets, anger and other emotional baggage earlier in life, you should have an easier ride when your hormones start to adjust.

The ten years or so leading up to menopause is called the peri-menopause. Your hormone levels are gradually adjusting, and this can trigger physical changes as well – the growth of fibroid tumors, increased period pain, heavy bleeding/flooding, cervical/uterine/endometrial growths/cancers, brittle bones, constipation, vaginal infections/dryness, diarrhoea and haemorrhoids.

That might sound a bit depressing but taking action early can ease the process. I developed heavy periods and fibroids in my mid-forties. Fortunately, my homeopath prescribed remedies that triggered my body to heal and I didn’t need the threatened surgery. It also eliminated the extreme period pain I had suffered all my adult years (and my mother before me). If only I had known that was possible when I was younger!

Hormone Replacement Therapy (HRT) is available and is very much appreciated by some, although I prefer to let my body find its own natural balance using holistic means.

My menopause, my way

Despite lots of work on myself, some unfinished business crawled out of the woodwork. Raw, empty feelings of loss and bereavement appeared as my periods reduced in frequency.

My childbearing years were coming to an end and something that had always been a possibility for me, a child of my own, was no more. That instinct, the desire I’d thought had been laid to rest ignited itself again. I knew it was crazy and impossible for so many reasons but my heart and body yearned for quite a while. Only when the final periods faded into distant memory did I truly find peace again.

See also  Living on the edge…

The creative side to the change of life 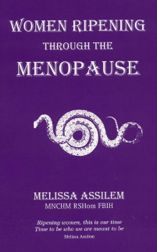 “Ripening women, this is our time. Time to be who we are meant to be.”

The need for a creative outlet in post-menopausal woman crops up over and over again.

A woman’s body has, after all, been designed to create. Initially babies. After the menopause, where do we channel that energy, that massive creative urge?

Melissa talks of older women being moral guardians and protectors, of it being a time when the woman moves into her power. For me, the change wasn’t a dramatic crash of thunder and lightning making everything different. It was a delicate, sensitive process of learning to follow my heart.

The fulfilling career seemed to stop firing me up. Projects I passionately believed in were canned and I got upset about it. It wasn’t just a job that paid the bills, I cared. I resented wasting a big chunk of my life in that way – perhaps the feeling of time running out had started to bubble up for me?
The need for a creative outlet in post-menopausal woman crops up over and over again.
Slowly a realization that there was another way came to me. It was time to put myself, my needs and dreams first in my life.

My career had for so long been my stability, the thing that I escaped to during hard times, the job title was who I was. Changing that was no small step.

Sometimes life gives us a big push or, if we are lucky, it dangles an opportunity in a glaringly obvious way. In my case, this was voluntary redundancy. My heart wanted me to be at home walking my dogs and feeling in balance. Part of me was terrified but I took the redundancy and soon my future was a blank canvass and it felt good.

A few months on, working part time, I took a life-changing trip to Peru and was drawn to train in the Andean Shamanic Energy Medicine. Then I also trained as a homeopath. I was being taken somewhere and fast! But where?

Suddenly I moved into a new phase. Now there was time to apply and deepen what I had learned for the benefit of others.

I also found love again (but that is another story!).

Finding a new purpose in life and doing what fires and delights us is so important. Only then can we contribute to the lives of those around us. For me, as for many others, it is a truly creative passion and a deep seated urge to do ‘what I do’.

Earlier in life we are often told that is selfish yet with that wisdom age brings the realization that it is essential, like breathing, for us to stay truly alive and vibrant.

There are some great books and articles out there on menopause and its surrounding issues. Jennifer Warden, a GP and Homeopath, has written an interesting article about HRT and the menopause that might be of interest. 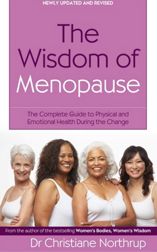 Dr. Christiane Northrup has also written some great books about women’s health. ‘The Wisdom of the Menopause’ is described as ‘The complete guide to physical and emotional health during the change’.

She is a very experienced obstetrician and gynecologist and it is a good reference book, covering medical aspects through to holistic therapies and diet.

‘Do not become alarmed when you experience yourself in totally new ways,” sighs Grandmother Growth tenderly. ‘You are changing, getting ready to be initiated into the third stage of your life. Are you ready for the ride of your life?’

For more information and resources: