Angela Merkel has been named by the Time magazine as Person of the Year for 2015. 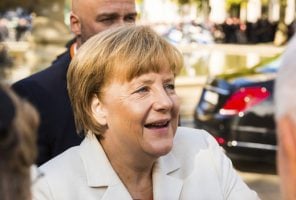 I had a little smile to myself when I heard the announcement. This remarkable woman has been Chancellor of Germany for 10 years, a world leader and arguably the most important woman in the world.

And she has a special place in my mind and heart and those of my family.

During the 2011 Easter holiday we went to the island of La Gomera, one of the smallest Canary Islands. We were staying near to Playa de Santiago, a small seaside town on the southern side of the island.

Visiting a restaurant one evening, I spotted a photograph on the wall and said “That looks like Angela Merkel,” to which my husband, John, replied “That’s because it is her.”

We found out that the German Chancellor liked to come on a walking holiday to the island each Easter. The island has interesting geography, having a northern lush green side and southern arid side. Walkers love it. The local newspaper was full of stories of how she and her bodyguards had come across on the ferry.

We went on a walk through the wonderful Laurisilva Forest, on the northern side of La  Gomera, and stopped for lunch at a restaurant in a valley. Our walk had been scheduled for the previous day, but had been cancelled because of the rain.

Our German guide told us that Mrs Merkel had been in the restaurant the day before, and that she was staying at the Jardin Tecina hotel, on the other side of the bay of Playa de Santiago.

On our last evening we booked our evening meal at the beach restaurant of the Hotel Jardin Tecina. 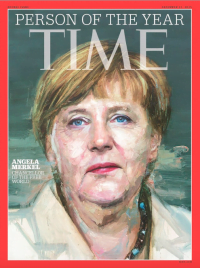 The food was excellent, and during the meal, I spotted a couple sitting across the room. Once again I said to my family “That looks like Angela Merkel”, and once again my husband said “That’s because it is her!”

Our two sons, Max, 14 and Leon,12, were with us. Max was due to go to Berlin with school in October 2011, and  we said to him “You will never get this opportunity again, go and say hello and tell her how much you enjoy learning German, and that you are going on a school trip to Berlin.”

With a bit more persuasion, both boys went over and said hello and chatted to Mrs Merkel and her husband for about five minutes.

On the way out of the restaurant, Mrs Merkel beckoned us over and asked us to give her the name and address of the school, saying she would invite the school party to visit German government buildings – even if she could not guarantee that be she personally would be able to meet them.

When we got home, I contacted the headmaster and told him that if he received a communication from the Office of the German Chancellor it was not a practical joke!

An invitation from Germany

To the delight of the German teacher, the email and a subsequent invitation did arrive. And when the full schedule for the trip was published we saw that not only were they doing the tour, but Mrs Merkel was due to meet them.

READ  Notes from a globetrotter: Beirut and the predictability of lightning 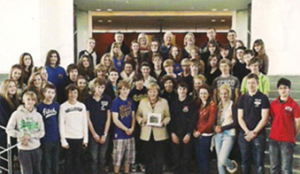 October 2011 was the height of the Euro crisis. There seemed to be almost daily meetings between European leaders. On Tues 25 October 2011, in between two such meetings, Mrs Merkel met with the school trip. Max was ushered to her office, and most unbelievably, she had that piece of paper that I had scribbled the school details on!

Max presented her with a book and a commemorative plate and walked with her to where she was photographed with the group.