Home / Time off / Me, my motorbike and travels around the world

I looked down onto the street from my hotel window and saw men wrapped in brown wool shawls as they pushed carts of unidentifiable goods along the narrow streets ready to set up their stalls in the marketplace. From here, four storeys up, I also had a good view of my motorcycle in its parking space. It would be safe; the hotel guard would be keeping watch all night. 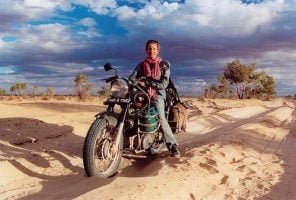 Taking backpacking a stage further, I had ridden my 500cc Enfield Bullet to Pakistan from India, where I’d bought it in ferociously hot Madras (Chennai), crossing the border into Pakistan to see what it was like here. It was winter 2001 and rather cooler than it had been in southern India in March 2000.

Feeling in a permanent wonderland since exiling myself from my British homeland the previous year, I had just booked into a small hotel overlooking a park, dry and bare at this time of the year. I unpacked my dusty luggage and spread my meagre collection of clothes on the bed, repacking sandals and my one summer dress at the bottom and warm woollies at the top.

I covered my hair with a headscarf and went out, guided by the sound of Pakistani music blaring from the shops selling CDs and still, at that time, cassette tapes. Lively Asian film music lightened the darkening scene.

If I’d thought that Pakistan was less colourful than bright, jingly India, I hadn’t reckoned for Commercial Market in Rawalpindi. As dusk fell, it came alive. Neon lights flashed in shocking pink, red, blue and yellow. People strolled in the streets, browsing the clothes shops. Mannequins in the brightly-lit windows were displaying the latest style of shalwar-kameez, the soft fabric loose suits to cover the shape but which can look so feminine and smart, always shown as always worn, with a dupatta headscarf. 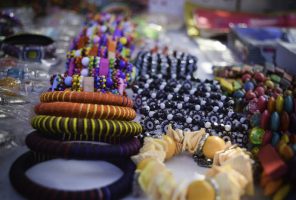 One shop was devoted entirely to glass bangles, the jewellery worn by almost every woman, the cheapest ones affordable to all for a few rupees. Sometimes worn singly but usually in groups or even all the way up the arm, they jingled whenever the woman raised or dropped her hand. I recalled the keep-fit class I’d organised for Pakistani women in Stoke-on-Trent a few years back before my change of career from health visitor to unpaid motorcycle traveller. As the women stretched their arms overhead, the school hall jingled and tinkled with glass bangles.

How far I had come in such different ways since then…

My marriage at a disastrous end, my children making their own ways in the world, I could think only of escape from the pointing fingers but still had the weight of guilt on my shoulders which I couldn’t shift. I’d lost confidence in my ability to do anything but ride my motorbike which was slowly becoming the means of my reinvention. I could feel the change in me after a year with this demanding machine which didn’t judge or condemn me. It was my salvation from slipping into a permanent state of self blame.

Not the ‘never go wrong’ kind of motorcycle, it needed me to keep it going. I owed it. It kept me going. My self-esteem grew with every mile. Every milestone overcome encouraged me to see that I was more than just a failed marriage.

Looking at the shop was like peering into a treasure chest full to the brim with gaudy gemstones. The colourful bangles were displayed, not on arms, but on white poles and were lit by bright lamps to show the colours at their best and to make them sparkle. Even the narrow plain ones were beautiful in their simplicity but some broader ones were encrusted with pearls or edged with gold. Some were speckled; some were silver with deep purple or emerald green or sapphire.

See also  How to become a minimalist with self storage

I wanted them all but had to content myself with taking a photograph to remind me. Captured on film were a husband and wife with their baby. The woman was pointing to some bangles at the top, asking the stall-holder to reach for some ruby-red and black ones which would match the rich velvet dupatta she had bought. I remembered the Pakistani homes I had been privileged to visit in the course of my job. This little baby, like every Pakistani baby would know when its mother was near by the tinkling sound of her glass bangles as she approached, and be comforted.

I moved away but then turned back. I couldn’t resist a few and chose three plain turquoise bangles for myself. They didn’t go too well with my motorcycle jeans, baggy jumper and boots but the sound made me feel feminine even if my clothing came nowhere near the elegance of the women around me in their shalwar-kameez.

I was also unable to resist the aroma of samosas fresh from the pan, and ate one at the stall with a cup of sweet chai before returning to the hotel.

I checked on the bike and decided to move it closer to the wall so it wouldn’t be in anyone’s way. As I did so I heard something on the bike snap. I moved the front wheel and saw something glitter, realising with dismay that I had broken my bangles, all of which lay in pieces on the ground. “Oh well!” I thought “My babies have long since grown up and there was nobody but me to hear the bangles tinkle anyway.”

The next day, Commercial Market was quiet and empty and dull except for a few fruit and vegetable stalls.

I got on my motorbike and contented myself with the knowledge that I would come across other colourful gems as I explored Pakistan… the gems that are the people I’d meet along the way, shining just as brightly to me as had my short-lived glass bangles.