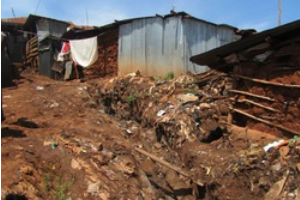 What can possibly be more fundamental to life than food on the table each day and clean water to drink? In the UK most of us take both of those for granted, and try to forget that in some parts of the world, there are children who are quite literally starving to death.

In Kibera, the largest slum in Nairobi, Kenya children are extremely malnourished, frequently having nothing to eat from one day to the next. After witnessing first hand the cruel reality of their extreme poverty, mother of four, Sally McGreevy, was inspired to set up the charity, Lunchbowl Network almost ten years ago.

Living in Kibera is quite simply about surviving each day. Homes are at best small shelters, which have been hand built from mud with make-shift roofs of iron sheets that often leak. There is no drainage and no access to clean water. Sanitation is poor and disease spreads quickly; TB, cholera, typhoid, malaria and HIV are commonplace. There is little work available and so with no income, families have no way of improving their circumstances. With so little and disease rampant, the mortality rate is high and many children are orphaned from infancy.

After her visit to Kibera, Sally could not get the vision of poverty and squalor out of her head. She returned to the UK resolved to try and help the children who live there to have some sort of positive future. 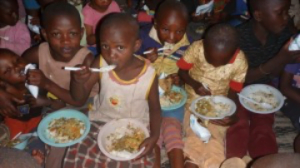 Sally had seen first-hand that without food, children were dying and so appropriately, from her kitchen table, she started to plan how she could help to provide them with the nourishment they needed to live. Ten years on, Lunchbowl Network now feeds in excess of 450 children a day, funded entirely by donations. Thanks to Lunchbowl Network, a child living in Kibera can receive a hot meal and the chance of a future, for the princely sum of 33 pence a day.

READ  Sleeping rough... the other side of the city

What is unique about Lunchbowl Network is that in addition to corporate donations, children here in the UK drive many of the fundraising initiatives. There is a plethora of school resource material available on the Lunchbowl Network website. After learning about the plight of the vulnerable and needy of Kibera, British children are inspired to help those much less fortunate than themselves. Events vary from cake sales to more outlandish initiatives such as wild adventures on Wimbledon Common and would-be record breaking tea parties, to just simply placing a few pence into a dish representing the Lunch Bowl. 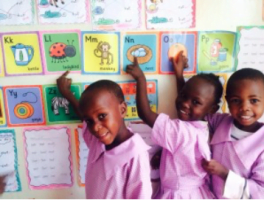 Even the very smallest amount of money can make a difference and little by little, the charity has been able to increase the number of children it is able to feed. In January 2015 Lunchbowl Network spread its wings wider and founded The Angel Kindergarten. This provides 55 small children of Kibera with their first taste of education as well as a full tummy. With this foundation, these children should be able to compete within the Kenyan education system for places in good primary and secondary schools and therefore vastly expand their opportunities for the future.

Tragically, there is a particularly high level of teenage pregnancy in Kenya, often as a result of abuse. Girls are frequently married at 14 years old and pregnant by the time they are 15. With scant medical support, many do not survive the trauma of childbirth but those who do often have no option but to turn to prostitution in order to support their families. Lunchbowl Network provides a rescue programme for vulnerable girls before they are swallowed into teenage marriage and pregnancy. The programme supports young women through education and by providing stability and gives them the chance of an independent future.

READ  Walking and volunteering for health and happiness 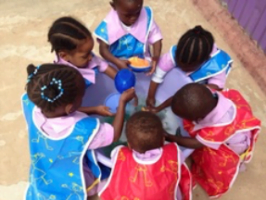 It is hoped that all those who have benefited from the work of Lunchbowl Network will in time become independent citizens. This will boost the local economy and help to put a stop to the self-perpetuating situation that exists today.

Lunchbowl Network is entirely administered by volunteers with every penny being ploughed into the charity’s coffers. Check out the UK team page to see some of the wonderful women working on this project for free. 94% of all financial donations are sent to the projects in Kibera and the other 6% is used to raise the next £1.

To find out more or to get involved, please click here for further information.