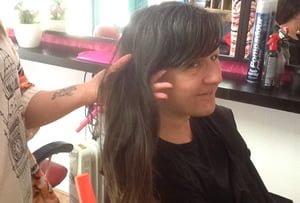 A while back, I decided that I wanted to see how long my hair would grow. I aimed to grow it long enough to cover my boobs, and joked with friends that the target was getting more difficult to reach as age and a little help from gravity was constantly increasing it!

It took about two and a half years to get ‘full coverage’, but I was left with a mass of thick, straight hair that fought being styled. So I decided to go for the chop, and take off most of the length in one go. Being a bit of a womble by nature, I started to think about doing something with the cut hair.

After a little internet research, I had quite a few ideas, but one stood out. I could donate the cut hair to an American organisation called Locks of Love who make wigs for children with hair loss.

Apparently wigs for children are hard to come by in the US. Those that are available tend to be adult sized and need to be stuck on, which causes irritation. Also, artificial wigs often look obviously false and are difficult to style without making them look matted. Locks of Love make wigs from real hair just for children and young people under 21. These are attached with a suction skull cap, which means they can be worn to play sport or even swim without risk of them falling off.

The before and after photos looked impressive, so I booked a salon appointment and explained my plan to the stylist. She was quite excited, but rather nervous when it came to making the cut. The bunch of hair I came away with was shorter than I wanted, and I ended up with a longish bob. Fortunately the cut hair was still just long enough for the organisation to use.

Sending it off was easy, but it does feel a bit strange to stuff your own ponytail into a padded envelope! 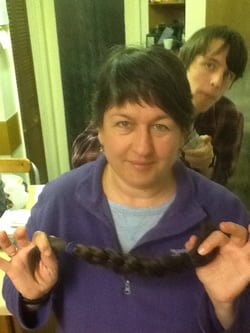 A few weeks later, I got an email to say it had been received, and that was it – a really simple way to do a little bit of good in the world.

Skip to 2014, and I had managed to grow another head of long hair. Cutting it off again seemed like an easy choice to make. As I was about to make a big career change it also felt like a good time to make other changes. I found that there is now a UK organisation that does something similar to Locks of Love, aiming to supply higher-quality children’s wigs than those available on the NHS.

It’s called the Little Princess Trust (though they apparently also help boys too). Sadly time has caught up with me, so my hair won’t work for them as it’s more than 10% grey. Locks of Love can cope with any amount of grey though, so the hair has gone to the US again. This time I managed to persuade another nervous hairdresser that I really did want my hair cut short, and I’ve had lots of comments on my new look.

Okay, I admit it, I put up a selfie on Facebook as well… that’s also meant a lot more chances to explain why I cut my hair. Hopefully I’ve started a trend – several people have told me they are now going to send their hair off, too…

If you fancy giving hair donation a go yourself, take a look at these links:

The two organisations have different requirements, so if your hair doesn’t work for one, then it may still be okay for the other: