Liz Smith talks to Freedom Chevalier about life in the news. 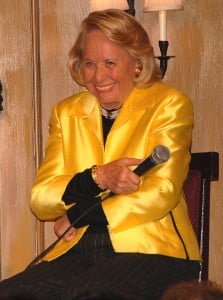 Liz Smith is 91 years old but still writes daily for several papers including the The Huffington Post. She describes herself as the “2000 year old columnist” and she’s been dishing on Hollywood’s famous and infamous for over sixty years writing for such papers as The New York Daily News, Newsday and The New York Post. If it happened in Hollywood, then Liz Smith has been privy to it.

Liz shares her thoughts on some notable stories, how she broke through the glass ceiling and ‘converted’ to feminism.

I liked the news, liked listening to Walter Winchell on the radio. I started making up, on an old typewriter, little newspapers where I wrote things that were happening in grade school. When I finally got to the University of Texas…they have a journalism department and I studied that. I wasn’t really thinking I was talented enough to do it, but I kept doing it.

When I got to New York [in 1950] I tried to get jobs at all of the great, established magazines and newspapers. If you weren’t a Vasser graduate, or…gone to one of the seven famous girls colleges, then they just weren’t that interested.

Breaking Through the Glass Ceiling

I just wanted to work. I wasn’t thinking about women’s equality. Such a concept had never occurred to me. I did have a long career where I worked for some prominent men who did help me and teach me a lot. I eventually worked for almost all of the newspapers in New York City; there were nine publishing when I came here. [Then] into television as a producer [for NBC].

The Advent of Instant News

It’s changed everything. It’s made by-lines a thing of the past. There are very few people who make themselves famous enough to have a by-line now that means anything. There are still great newspapers like the Guardian and the New York Times. I love them and depend on them and read them. But I don’t pay much attention to instant news. When everybody has an opinion I just don’t care.

There were both good things and bad things about what we’ll just call the [Walter] Winchell era. The women in Hollywood, Hedda Hopper and Louella Parsons, they played favourites just as much as they attacked people. I’m afraid I did some of that when I had a by-line, finally. But I tried not to attack people unfairly. I always gave the opposite side a forum to say whatever they wanted. 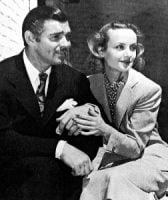 When they reported either favourably or unfavourably about a star, for instance, when Clark Gable married Carole Lombard – some of them had their noses out of joint, that they didn’t get that story first, so they attacked. And pretty soon it just fell by the wayside. The Gables had a perfectly happy marriage until she was killed in a plane accident. They took sides too much, so by the time I came along in the mid-50s I just tried to do something different. I didn’t pretend that I was omnipotent. Sometimes I offered an opinion or sometimes I gave the person being discussed a chance to answer. So that was already amazing to people and I guess it accounted for some of my success.

The Internet has changed things almost as much as the invention in the Gutenberg [printing press].

There’s so much ubiquitous celebrity these days, in all fields of talent and non-talent, and art, and what passes for art. I think the mass of it has diluted its meaning. You’re suspicious of everything you read. You don’t necessarily believe it; in three days the person you’re praising could be indicted.

There are very few, anymore.

There are maybe twenty superstars in the world. George Clooney, Charlize Theron, Johnny Depp. Occasionally, television will produce somebody great, like Tina Fey and Amy Poehler (Saturday Night Live). They are authentic; but there are so few of them.

Her most famous stories

The Trump divorce came along. She [Ivana Trump] came to me. He [Donald Trump] wouldn’t talk to me and tell me the truth. For a year I’d been asking him to make some kind of statement. It divided people up. In retrospect I think it was ridiculous. It was just two people fighting over divorce money. It wasn’t a real story, but it made me famous all over the world.

I travelled with Elizabeth [Taylor] and Richard Burton. I was one of the few reporters who had access to them. I wrote about them. I became a specialist. I was the only newspaper person at her wedding to Larry Fortensky. She and I remained friends. 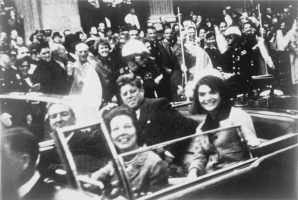 The story of President Kennedy’s love affair with Judith Exner. I didn’t know about it till after. When he was killed, people didn’t know everything like they do now.  Speculation was rife.  I met her secretly and she told me her side of the story.

I became friends with Governor Ann Richards, before she was elected governor, and then after when she came to New York.

She was wonderful. We’re dedicating a certain part of Manhattan as a park to her; Bette Midler is. I’m going to officiate. Her daughter Cecile will be there. Ann …loved New York. She spent the last five years of her life here. Going around with her was like being with a rock star. People just loved her. She was just delightful.

I spoke at her memorial with Mrs. Clinton, in Austin. I’ve never been back to Texas since. I’ve never had the heart to go back.

I did eventually become a feminist. I was friends with Gloria Steinem in the beginning, and I have remained so. She used to tease me that I didn’t do anything to promote women’s rights. And she was correct. She said, Liz, you just want to be the only Jew in the club.

I laughed at that, but I got her message and I started working. I got converted to women’s rights.

I’m very old now. I’m just doing it [writing] to fill up time, until I leave this world. Because old habits die hard, and having a deadline every day is not the worst thing that ever happened to anybody.

It’s quite an incredible time to be alive. The only reason I fear becoming 92 years old (February 3rd), is that I’d like to stick around and see what is happening. I love news.