As World Asthma Day approaches, I’m pleased this condition is being highlighted. I don’t suffer from asthma, but I’ve experienced first hand what it’s like to live with it on a daily basis. My husband has chronic brittle asthma, sometimes known as severe asthma. 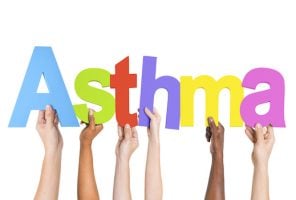 This doesn’t just mean he has a particularly bad form of asthma – it’s a specific type of the condition. When you think of asthma it often conjures up an image of someone wheezing and puffing, but in the 14 years I’ve known my beloved husband I’ve never seen him like that. But I have been with him through many an asthma attack.

There are two types of chronic brittle asthma. Atopic, which means the triggers are external, such as dust, aerosol sprays, perfumes, changes in the weather, pet hair etc. And non atopic, with internal triggers such as most wines, orange juice, medicines, artificial colourings, stress and illness.

Not everyone has the same triggers and my husband can’t always identify his, even after suffering for 37 years.

Unfortunately, he suffers with both types. This meant he spent his childhood years and every Christmas and his January birthdays in hospital from the age of two until he was about 17.

He has never learned to swim because the chlorine in most swimming pools would hospitalise him.

As a result he was picked on at school – because he was hardly ever there – and left school with not many qualifications to his name. His poor mum resuscitated him on a regular basis, receiving calls from the school saying he looked ‘absolutely fine’ but he was collapsed on the floor and they didn’t know what they were supposed to do.

In another instance, he had visited a friend’s after school and a seemingly innocent couple of glasses of orange juice subsequently hospitalised him for months.

The knock-on effect of this in adult life, as well as living with it daily, is that his employment history is very colourful. Some jobs are just not maintainable. He once worked in a call centre which wreaked havoc with his airways, and any kind of job with high-stress situations can really take their toll.

It must be really scary as a sufferer of this debilitating condition. He often simply wakes up with asthma, unable to get any air into his lungs at all, and the result of this is he spends several days completely wiped out because just being awake is exhausting.

Many times – in fact probably half of our married life – he has spent most of the night awake because it’s preferable to waking up feeling like an elephant is crushing every last drop of oxygen out of his chest.

As his wife it’s not been an easy journey either.

I can honestly say it probably took me three or four years to begin to understand his condition and how it felt for him living with it. I used to get so frustrated. We’d make plans, a nice day out somewhere, for example, and he’d wake up saying he couldn’t go.

See also  How nutrition can ease the menopause...

I openly admit it often felt like a convenient excuse sometimes, because he didn’t ‘look ill’, although I realise now that’s not the case. In our earlier years we argued quite a lot and that probably didn’t help his stress levels either. But I was already a carer to my young son with autism and was beginning to feel like his carer, too.

This isn’t a poor-me sort of article. It’s about the reality for all parties of living with an ‘invisible illness’ that there is still a lot of mystery about. We’re really lucky that our nine year old hasn’t been born a sufferer, as that was something I really worried about. They will tell you it’s not hereditary but we often wonder.

Like any chronic illness we never stop hoping for a cure. Apparently researchers are making headway with discovering the causes behind asthma triggers but the results are probably a few years away still.