Home / Menopause / Living on the edge… 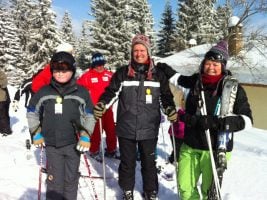 As a family, we recently took up the gauntlet thrown down by some good friends to go skiing for the first time. As a reasonably fit 47-year old I couldn’t help feeling afterwards that while I had a ball, I probably should have nailed this skiing business sooner…that way I’d have been fitter, lighter (in weight) and a lot, lot bolder in my choice of slopes.

The 25-year-old Melanie would have laughed in the face of most blue and red runs and might have even psyched herself up for a black or two but now, sadly, I feel these may just be tantalisingly out of reach!

At our wonderful snowy ski resort in Bulgaria, there was one main green run for us beginners (the other one being mostly inaccessible due to bad weather) but this gave us the dubious honour of crossing not just one but two nasty red runs AND, yes you guessed it, the black run from hell or ‘Toby Falls’ as it became known once my godson had well and truly christened it with his backside on day 1.

While teetering on the start of said awful green/black crossing on my third day, this ski virgin was suddenly gripped by the idea that skiing actually is a good analogy for how to cope with what life throws at you…Don’t stare too hard over the edge or spend all your time and energy worrying about it, in case you don’t like what you see! Far better just to push on without delay, focus on what’s right in front of you and park the peripheral stuff, which nine times out of ten doesn’t matter (err, even if it is a snowboarder doing 50-miles-an-hour over your head).

Since our little ski trip, I’ve decided to adopt this strategy for my ‘significant’ birthday, a few years away, and would advise my sisters out there to do likewise. There are so many questions that a woman in her late 40s could (and some would say, should) ask – which bit of my body is going to start letting me down first?; am I ever going to shift that extra weight?; will I end up completely grey by 50?; will I need a knee replacement soonish?: and, oh yes, when will that happy harbinger of older age – the ‘Big M’ – come knocking at my door?

See also  A move across the Channel: Welcome to France

When I say ‘Big M’, I am not, of course, referring to that delicious and nutritious fast food delicacy revered by teenagers the world over (they tell me it’s the gherkins that do it) but the endless shopping list of seemingly random symptoms that us women of a certain age start to experience – and which add up to the menopause. The one good things is that we all re-emerge having managed to banish that ultimate of female annoyances, periods, or ‘Doris’ as me and a best mate call her!

Having canvassed opinions about the menopause among a few women friends of a certain age (with extreme caution), it seems some are surprisingly ahead of me in this game, some behind, but we will all get there in the end so why worry too much? While I may not be able to resist peeking over the edge occasionally (just in order to get the latest advice on skiing technique, you understand) I’ve kept my eyes firmly on the steady green run straight in front.